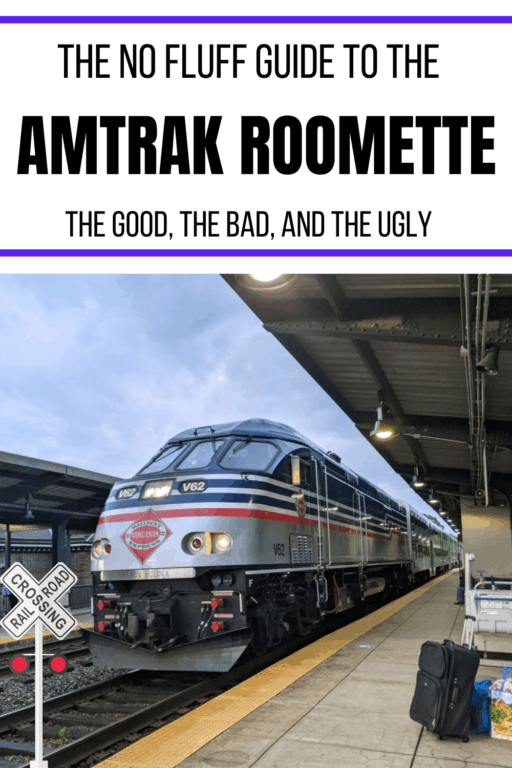 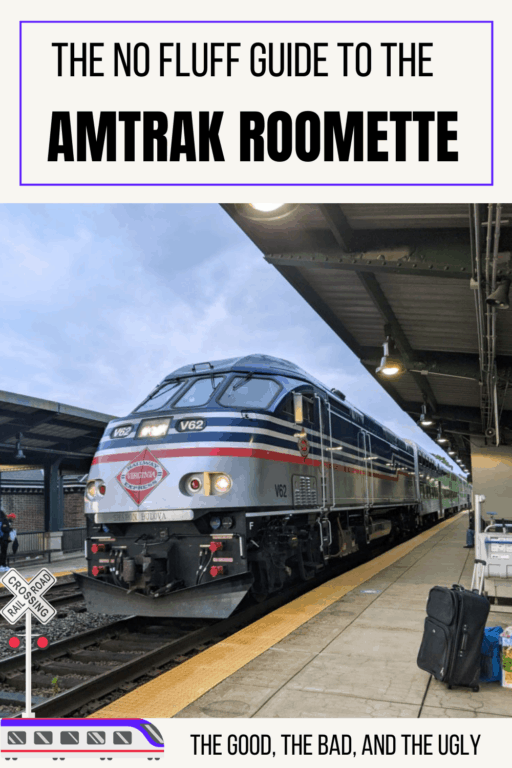 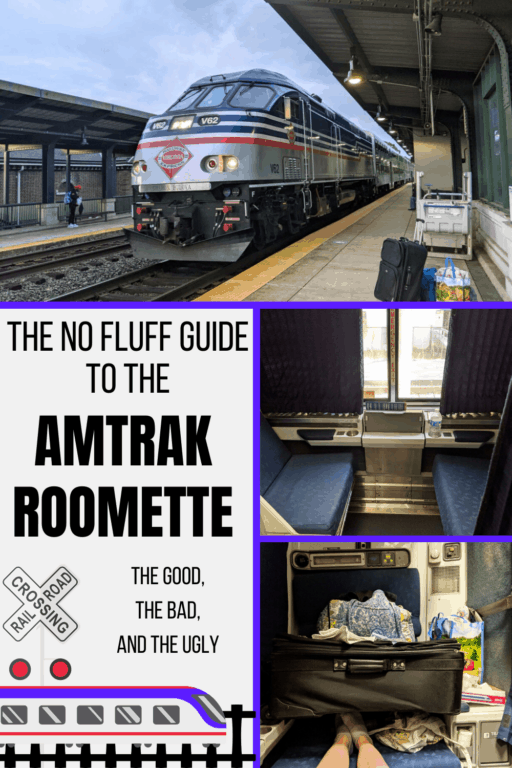 Here is the no fluff guide to the Amtrak Roomette – the good, the bad, the ugly, and the really ugly.

Best solo trip ever….20 years ago.

Many, many moons ago I booked a ticket on Amtrak from Salt Lake City, Utah to Philadelphia, Pennsylvania. I had been transferred to Utah for a job and then two months later transferred back to Philly. Although my company wanted to buy me a plane ticket, I instead asked to travel by train so I could see parts of the country I had never been to – like Colorado and the Rocky Mountains.

It was so much fun. Originally scheduled as a 52-hour trip, it turned into a 4-day experience due to a freight train derailment along the route and extreme heat, which caused sun kinks on the tracks. Despite the delays, it was one of the best solo trips I have ever experienced.

I had just a regular seat in one of the cars, no upgrades to a sleeping cabin or a roomette. And it was wonderful. It was just me, my Sony Walkman, and my bags. I ate in the dining car, gazed at the mountains in the viewing lounge, and slept as little as I could so I wouldn’t miss a thing.

Now I have taken Amtrak in the last 20 years – usually short trips between Fredericksburg and Richmond, Virginia, where once I arrive in Richmond I hop in an Uber to the airport and fly to Orlando. Rarely is the train ever on time, and the delay is usually over 45 minutes. Let’s face it, some routes on Amtrak are just doomed to be chronically late always. It’s tough because on many routes Amtrak shares the tracks with freight trains and commuter rails.

Fast forward almost 20 years later and I decided to take the train again from Fredericksburg, Virginia back home to Winter Park, Florida. It’s a trip that is scheduled a little over 16 hours and 800 miles. The train was scheduled to leave at 8:30 pm from Fredericksburg and arrive in Florida at roughly 12:30pm the next day. Due to scheduling issues, my other option was to stay overnight at an airport hotel in Richmond and fly home the following day. So I chose to do the overnight on the train.

My fare was $131 one way for a regular seat or $451 for a private roomette. The Amtrak roomettes are touted as having two comfortable seats by day and an upper and lower berth for sleeping at night. There is a private toilet with a sink in each roomette and a private shower in each sleeping car. Meals in the full service dining car are also included in sleeping car fares.

Amtrak offers an opportunity to bid on an upgrade from a regular seat to an open roomette and I decided to try my luck. I bid an extra $225 on top of my regular ticket – making my grand total $356, a $95 savings from purchasing a roomette ticket at full fare.

What’s with no luggage service in sleeper cars?

I arrived early on the platform in Fredericksburg with my luggage (which consisted of a medium sized roller board, an airplane carry on tote, and a small bag filled with books and snacks.) The train arrived an hour late and because Fredericksburg is not considered a base station, there was no luggage service. I was shown to my roomette and had to creatively fit my luggage onto the adjoining seat in the room – thankfully I was traveling solo and didn’t have to share with another person.

It’s absurd that there is a luggage car on the train and I had to store my luggage in my tiny roomette. Where would a second person sit?

There was an attendant in the sleeping cars who offered to pull down the upper berth for me to sleep once I boarded. And on the Amtrak website, they seem very proud to offer WIFI aboard the trains. All I will say is that I never stayed on the train WIFI more than 60 seconds at a time. It is absolutely non-existent. And that’s literally all I can say about Amtrak’s advertised WIFI.

Thanks to delays, I missed the dining service I paid for with my Amtrak roomette fare.

However, before I slept I wanted to grab some food. I was not expecting a full service dinner at 9:30pm but food was included in my sleeper fare. However, when I got to the dining room, it was closed. If the train had been on time, I would have been able to enjoy a nice salad or appetizer. Instead, I had to walk a car forward into the snack bar and purchase a plate of a hot dog and a bag of M&M’s for $10.

I had to eat my “dinner” in my roomette due to COVID protocols, not Amtrak’s fault. Besides the eating, watching a movie or sleeping in the privacy of my own room was ruined by the stench.

That special stench in an Amtrak roomette….

As I settled back into my roomette I realized one major disadvantage of having a private toilet. The toilet is inches from what Amtrak called the comfortable seat, and it stank. I would compare sitting in an Amtrak roomette to sitting in the lavatory on an airplane. That’s exactly what it smelled like and every time someone in another roomette flushed, the smell would heighten.

I literally paid over $350 to travel in a stinky lavatory. For this reason, and this reason alone, I would never upgrade to an Amtrak roomette again. It was quite off putting. I never even used the toilet in my room as there was a bathroom in the next car forward and it was bigger than my entire roomette.

I can’t imagine having to share the roomette with someone else, not even a spouse or good friend. Every time someone had to use the toilet the other person would have to step out of the roomette. Just no. Ew. Did I mention the stench?

Getting into my berth was like an Olympic sport.

The roomettes have doors and curtains for privacy. When I wanted to sleep, I just closed the door and pulled the curtain. Sleeping on the top berth was an experience. It was so difficult to climb up into. I had to step onto the toilet (closed, of course) and pull my weight up using the walls, maneuver my other leg across just to get into the bed. As someone who was still recovering from shoulder surgery it was a very difficult feat. I could not imagine how an older person could do it.

I was afraid I was going to roll of the berth but a) there isn’t enough room to fall off as the adjoining wall was really close, and b) there was a netting that would prevent you from falling off very far.

Another non-stellar microwaved meal in an Amtrak roomette

Although I didn’t sleep very well, I was happy to see the morning come where I could get a proper meal. And by proper meal I mean a Jimmy Dean’s sausage biscuit and a bottle of orange juice. Again, I understand about COVID protocol but they couldn’t stick a waffle in the toaster?

It was also nice to finally see sunlight and passing scenery. The train makes several stops where passengers can step off the train and get some fresh air. I believe my route had at least 6 stops where we were able to get off the train and stretch our legs and breathe in something other than toilet air.

Why offer a dining car at all during COVID?

Lunch was equally disappointing. A cheese and cracker platter. No salads or sandwiches as touted on the Amtrak website, and again, I understand the COVID thing, but pre-packaged chicken or pasta dishes aren’t very hard to serve.

Needless to say, I could not have been happier to get off the train in Winter Park, almost 2 1/2 hours after our scheduled arrival.

So in summary, would I take Amtrak again? The answer is yes. But I would never upgrade to an Amtrak roomette again. I would rather grab a seat in the quiet car and pay for my food instead of having to rely on a dining schedule. For $356 one way, I could have enjoyed a night at an airport hotel, slept in a real bed, and flown home in an upgraded extra legroom seat on an airplane. I am grateful I didn’t the pay original $451 fare.

It’s a fun experience to do once though, and hopefully post COVID the food upgrades from microwaved convenience store food. I don’t know what would help the toilet stench though. My recommendation? Do not upgrade to the Amtrak roomette unless you are on a really long trek across the country, and in that case upgrade to a full bedroom. At the time of this writing, a regular one bedroom on the same route that I took was selling for over $1500 one way. That’s easily a first class ticket on an airplane that will get you to your destination in a quarter of the time the train will take. And be sure to download any movies or tv shows you wish to watch while on board because the WIFI didn’t stay connected more than a minute at a time.
Click here to cancel reply.

I am scheduled to take Amtrak Silver Star between Tampa and North Carolina on November 9. A trip I have taken several times already. I leave Tampa at 530P and arrive in North Carolina at 8A. You really don't lose a day that way so it's convenient. I will travel in a roomette. There is luggage service. This trip I have a Viewliner II new equipment with no in room toilet. From what I've heard the new cars are better. Dining is slowly being upgraded back to the traditional dining of yore. I have my own wifi hotspot so Amtrak's WiFi is of no consequence. I am not going to be doing much work anyways at those hours. It's get on, eat, and lie down. I have a credit card that accumulate points and Amtrak often runs points sales so my net cost of travel is usually much lower than rack rates. Overall it's a good deal. It beats flying and I usually enjoy the people I meet.

I recently took Amtrak, with a roomette, from Havre, MT to Chicago. I did not have a toilet in my roomette, for which I feel grateful. It is definitely a space big enough for only one person. I, too, slept in the upper berth. I managed to get into the space, but it would have been impossible for someone of limited mobility. I did like the privacy of the roomette, I must say. Moving along, just about all of the Amtrak employees were extremely nice. All things considered, the meals are really good. And as long as Amtrak doesn't own most of the track, scheduling issues are going to be a part of the deal. Looking at the views is definitely a highlight of any trip. In conclusion, I would say that, if you have the time and money (it's not inexpensive), try it at least once. And if you're traveling alone, get a roomette. You can always mosey up to the lounge car if you want someone to talk to.