First, let me say, this is not a review of the dinner train on the Branson Scenic Railway. I was aboard the regular excursion that is offered several times during the late morning and afternoon. 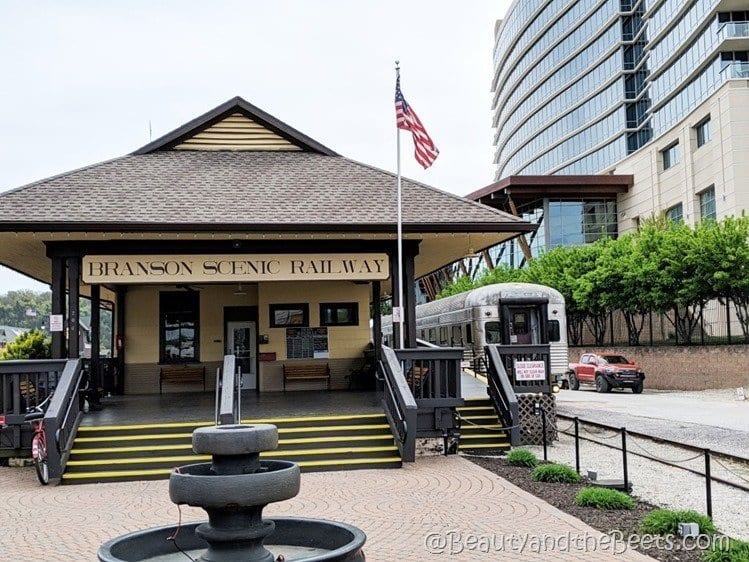 Branson, Missouri is famous for its shows (like Andy Williams and the Welk family), outlet shopping, and having windy, hilly roads. The town is home to some pretty cool attractions like the Titanic Experience and the Branson Ferris Wheel. There’s a lot to see during the day and lots of shows to choose from for your nighttime entertainment. I, along with a colleague, found ourselves in Branson with an open afternoon of free time. We decided to take a trip aboard the Branson Scenic Railway. A 40-mile trip over the Missouri and Northern Arkansas Railroad, it’s a great way to spend the afternoon exploring the foothills of the Ozark Mountains. 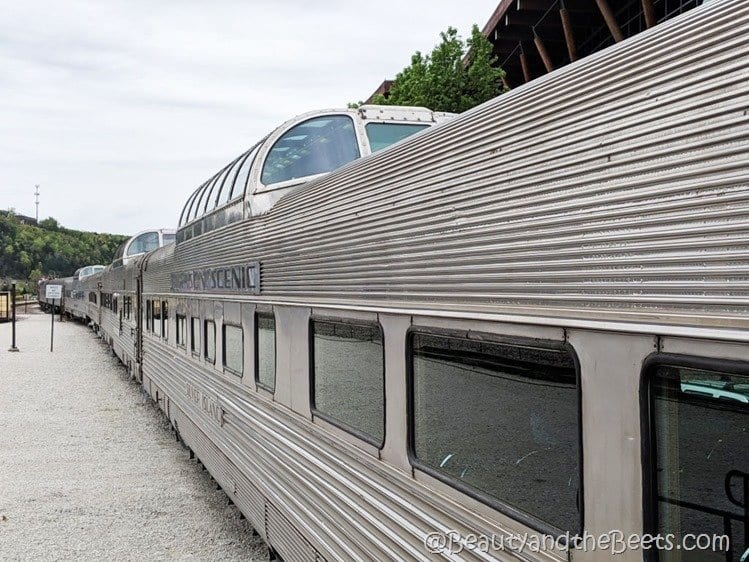 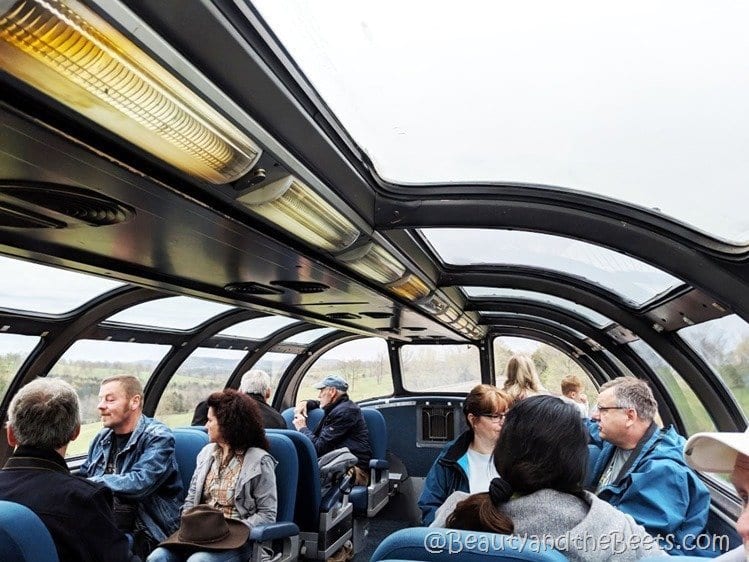 Make your reservation for the Branson Scenic Railway early

When buying your ticket, you will be assigned a number. This number will determine your boarding order, and the lower the number, the better chance you have at sitting in one of the  dome cars. The numbers will be assigned according to the order in which you book your trip, so book early. During my visit, they had 3 dome cars available with plenty of seating in designated coach cars as well. (just one note: the domed cars are not recommended during periods of rain, as the cars leak due to their age.) 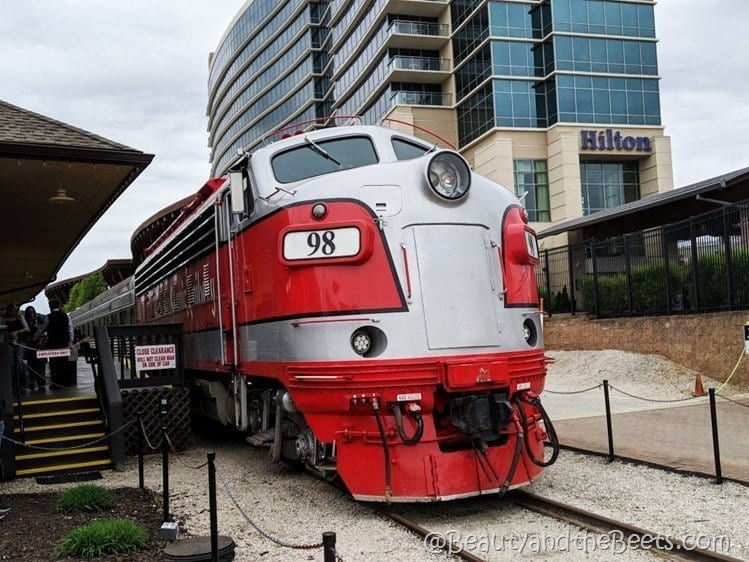 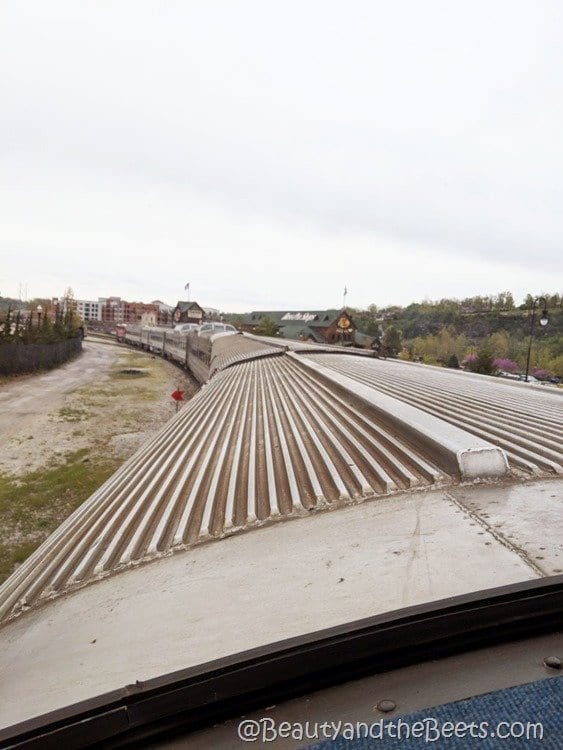 Step back in time

The Ozark Zephyr is a vintage diesel locomotive engine that guides restored cars from the 1940’s and 50’s. You will definitely feel like you are stepping back in time as you board the train. 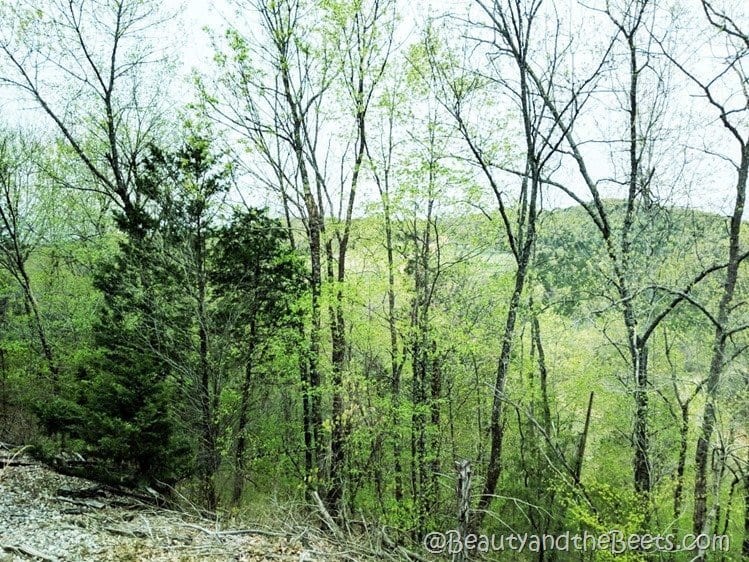 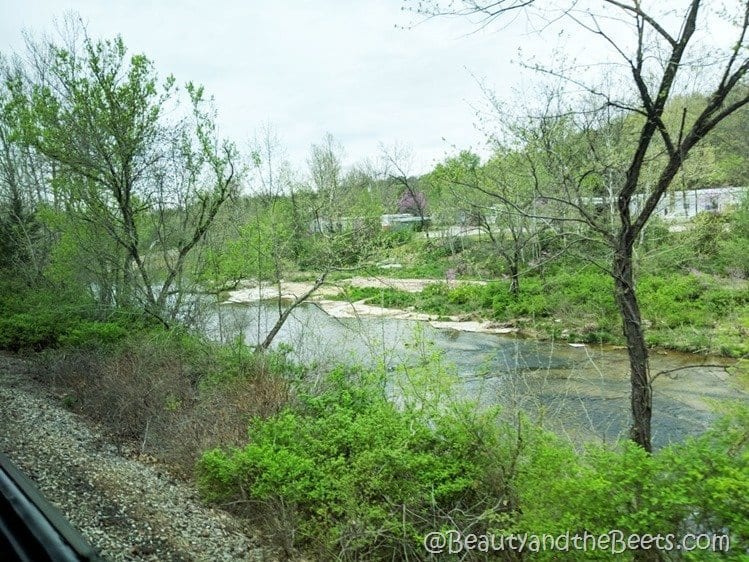 There’s a Northern and a Southern route

The 40-mile round trip will take about 1 hour and 45 minutes. As you embark on your adventure, you will have a very knowledgeable narrator who will tell stories about the train’s history, and point out interesting scenery along the way. The trip we enjoyed took us South over the Arkansas state line. Depending on the day and time, there is also a Northern route that will take you deeper into Missouri. The direction of your trip will not be known until just before departure. This is because the Branson Scenic Railway shares its tracks with other live trains that pass through the area. 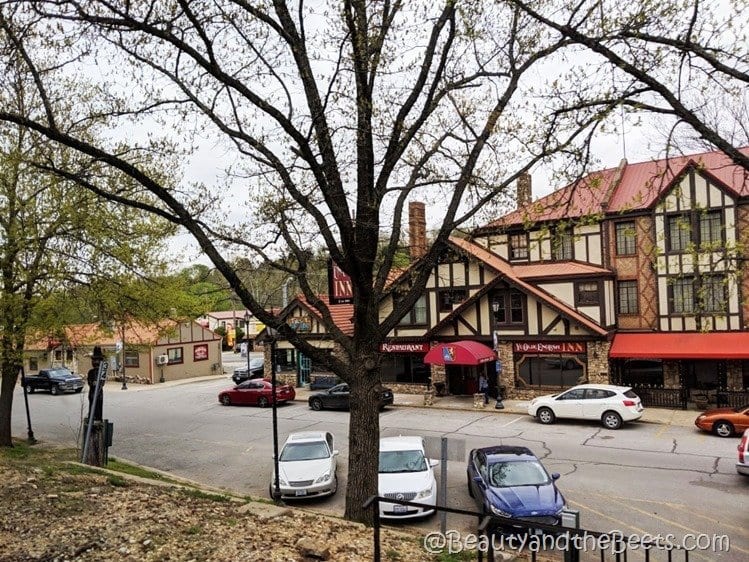 Pass by some cute little towns aboard the Branson Scenic Railway

We passed by the Tudor style town of Hollister (home of the delicious Hook and Ladder Pizza Company) and went through a few towns that were once thriving, only be deserted after devastating tornadoes destroyed them. 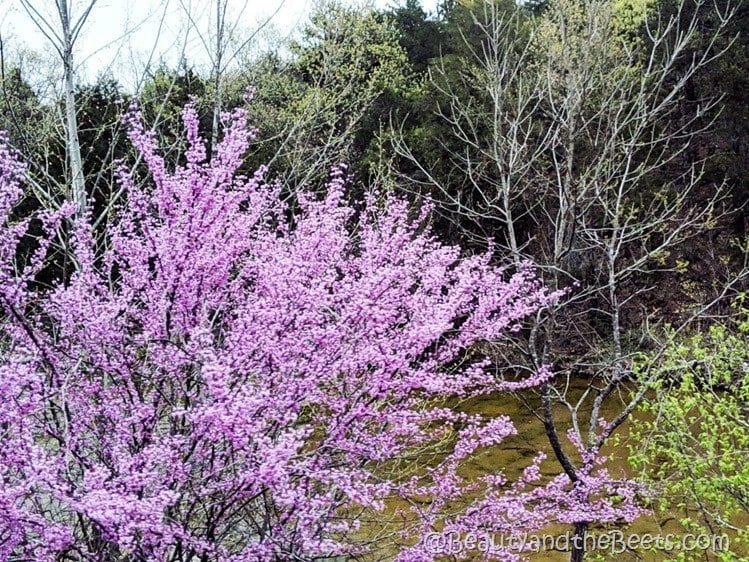 The colors are in Springtime bloom

Most of the scenery was along Turkey Creek, an offshoot of the White River. The redbud and dogwood trees were all in full bloom so the colors were spectacular. 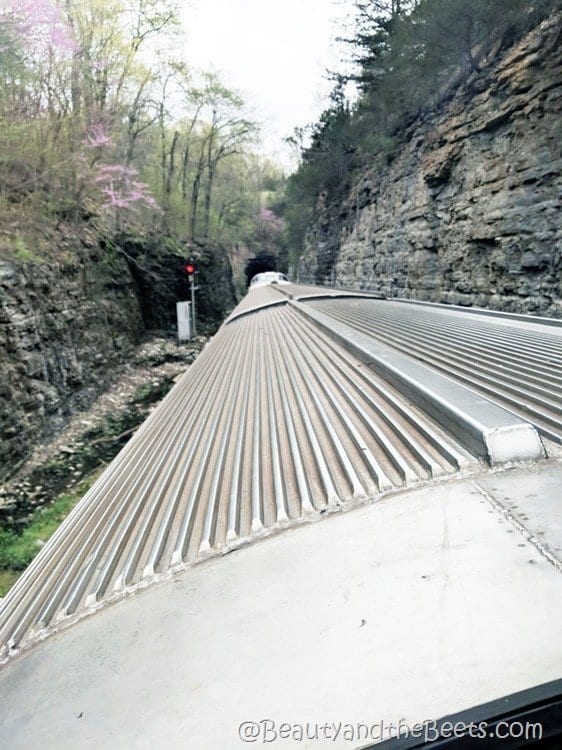 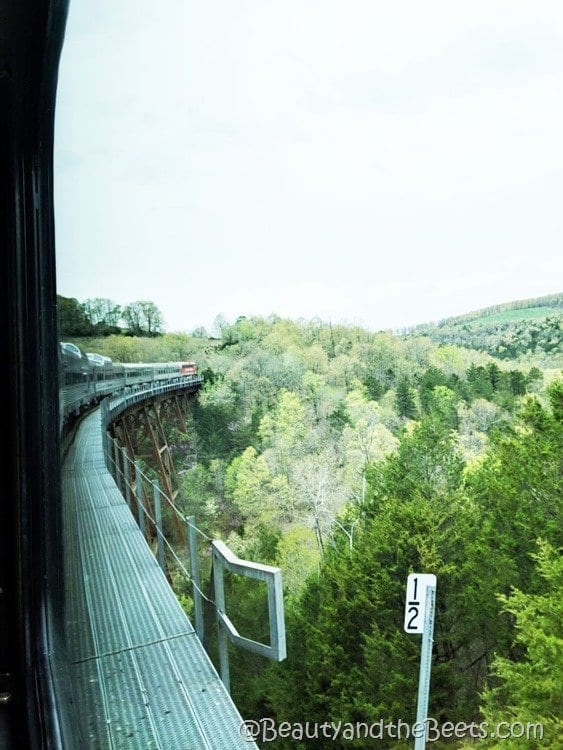 We passed through a few tunnels, crossed a few bridges, and eventually came to a stop at a vista with sweeping views of the Arkansas prairie. This is where the train turned around and headed back into Branson. 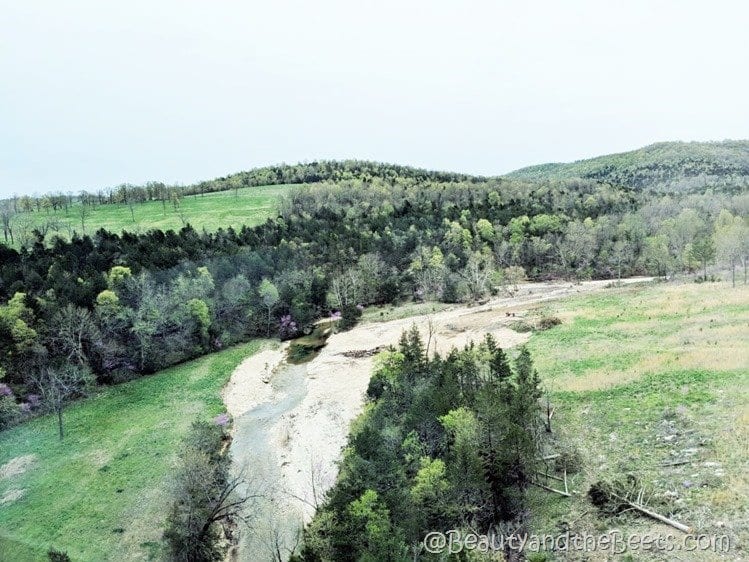 You can buy food and beverages on board

The Branson Scenic Railway has a very strict policy about bringing outside food and beverages on board, but you can purchase bottled water for $1 in the Depot before the trip. There is also a concession car where you can purchase light snacks and sandwiches once you have boarded the train. There is no alcohol allowed on the train, not even on the dinner excursion. 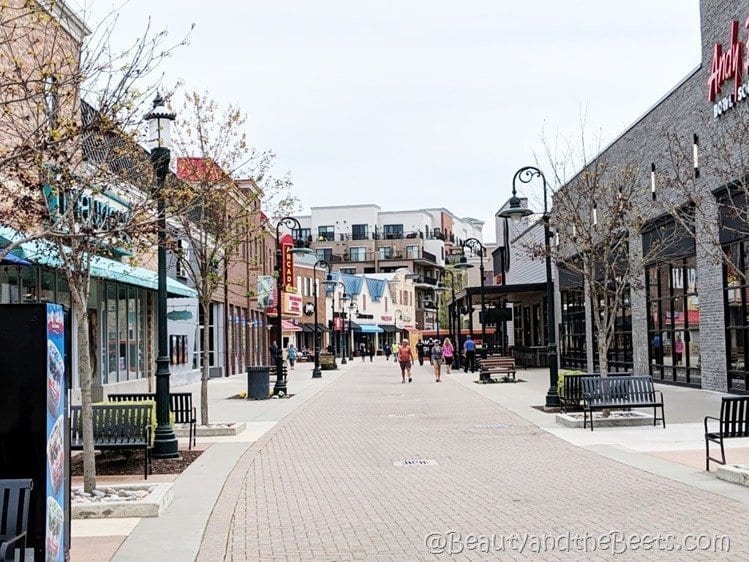 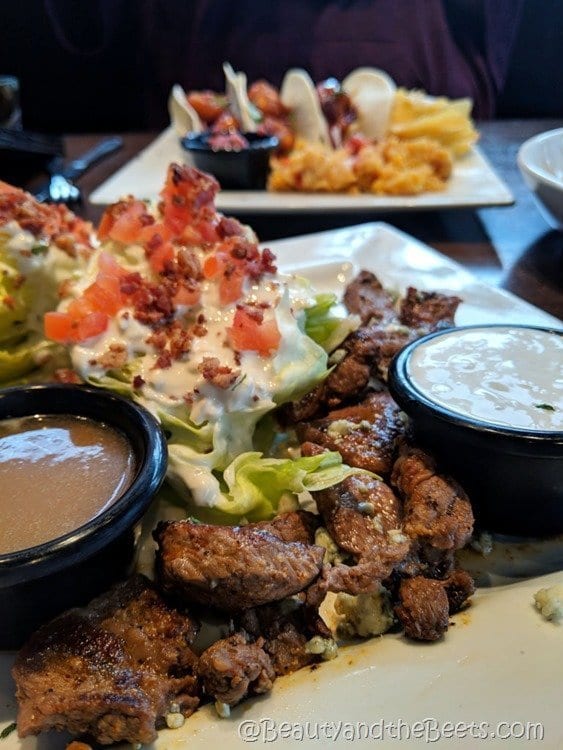 After the Branson Scenic Railway, dine at Branson Landing

All in all,the Branson Scenic Railway was an interesting way to spend a few hours. The train departs and embarks in downtown Branson. From the Depot, it was a simple walk across the street to Branson Landing, an area along the river with over 100 specialty shops and restaurants. We had lunch at the Big Whiskey American Restaurant and Bar and stayed to watch the fountain show at the Landing (at the top of every hour).

I would recommend the day excursion train if you are nostalgic for the old days of train travel. Paired with shopping and dining at Branson Landing, it’s a great way spend a few hours exploring the old and the new elements in downtown Branson.

For more information and to book a reservation visit the Branson Scenic Railway website.

Disclaimer: I received complimentary admission aboard the Branson Scenic Railway. I was in town as a guest for #BloggingBranson and the Stone Castle Hotel and Conference Center in Branson, Missouri. No other compensation was provided and I arranged my own travel to Branson. All opinions are 100% my own.