Here is another installment of our trip to the south.
Previous trip recaps can be found at the end of this post.

The day after the massive ice storm crippled the city of Charleston, many of the schools, offices and bridges remained closed as people recovered from losing power and heat.  The Ravenel Bridge,  which is the main bridge into the downtown area from the north was still closed.  Though the surface of the road was no longer icy and slick, there were concerns with the sheets of ice that were falling from the cables as the bridge defrosted. 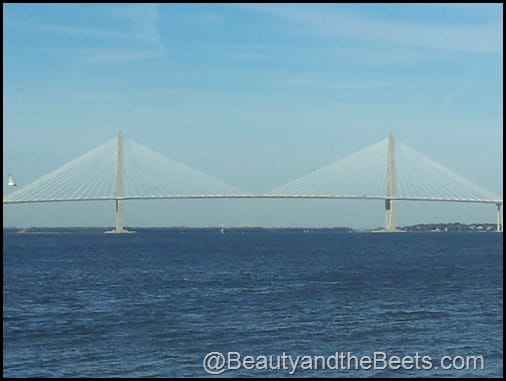 Chad ended up with an unexpected day off so we decided to grab some lunch if we could find anything open.  I found this very unique and eclectic place called Butcher and Bee.  The menu is posted daily on their Facebook page and is written on a chalkboard when you walk in. Luckily for us, they were open. 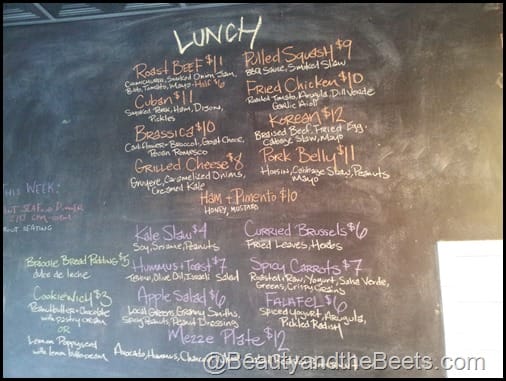 Two things on the menu had caught my attention- the curried brussel sprouts and the kale salad with peanuts.  Even though we had been eating rather well on our trip thus far, I was really craving brussel sprouts and kale- two things we eat at home on a weekly basis.  I was so happy to get our fix while out on the road. 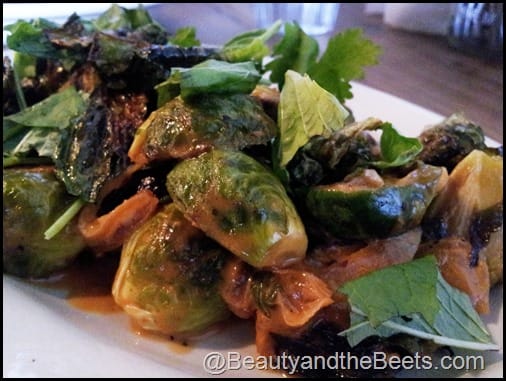 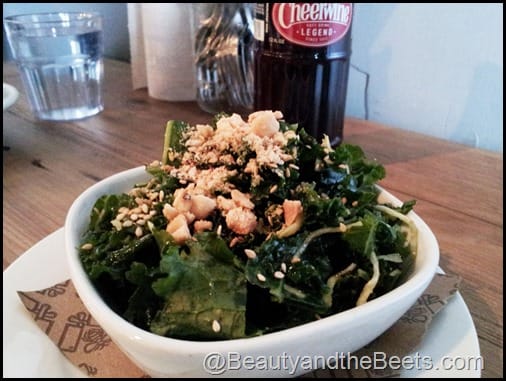 Also interesting was the Pulled Squash– shredded squash with BBQ sauce, smoked slaw and pickles on a roll- a Vegetarian version of the pulled pork sandwich.  I would never miss the meat if I could eat pulled squash any time I felt like a little BBQ.  I have now found a recipe for this so I can make it at home. (Hello Vegan Mondays!) 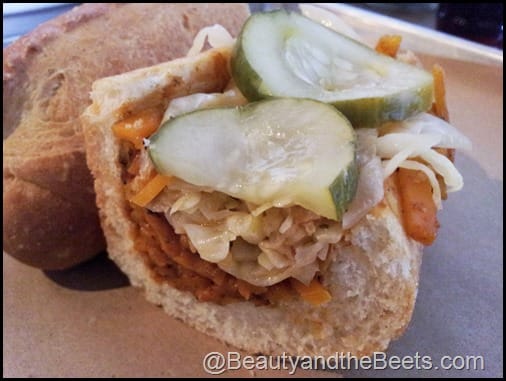 I also got a kick out of the washroom at the restaurant.  There was a sugar hand scrub on the sink and a little chair with folded washcloths instead of paper towels.  It’s the little things that impress me.  Something else to recreate at home!  Between the food and the eclectic atmosphere, I think this was my favorite restaurant out of everywhere that we ate the entire trip. 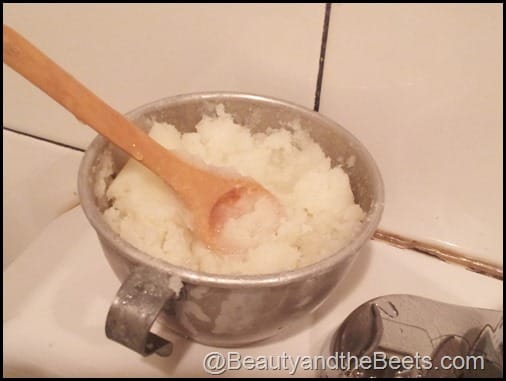 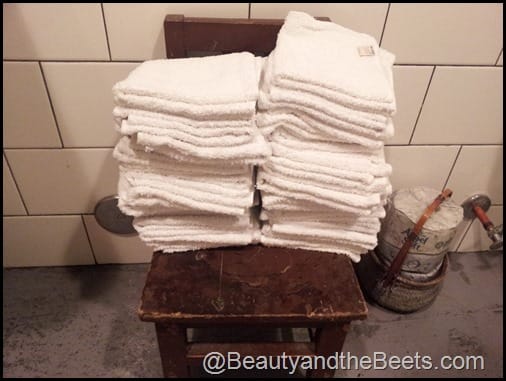 I also finally got my Cheerwine– a cherry cola made locally in North Carolina using cane sugar instead of high fructose corn syrup.  They sell it everywhere in the Carolinas and it is mighty delicious. 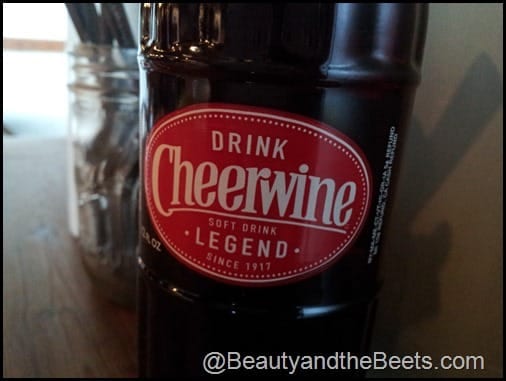 We took a quick drive through Charleston, snapping a few pictures of the fancy mansions and houses of the downtown area.  The temperature was still hovering in the 30’s- just too cold to get out and walk around. 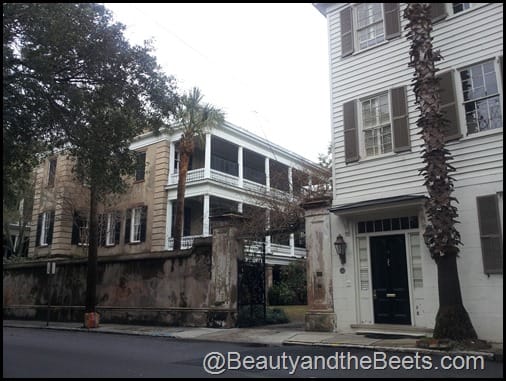 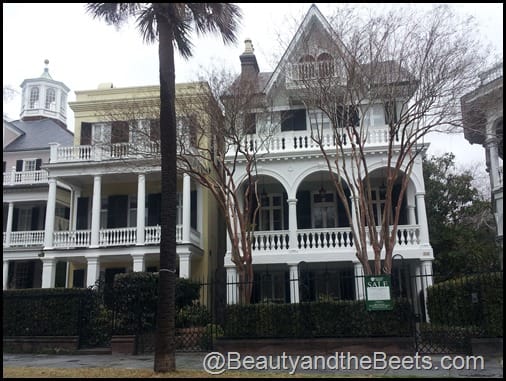 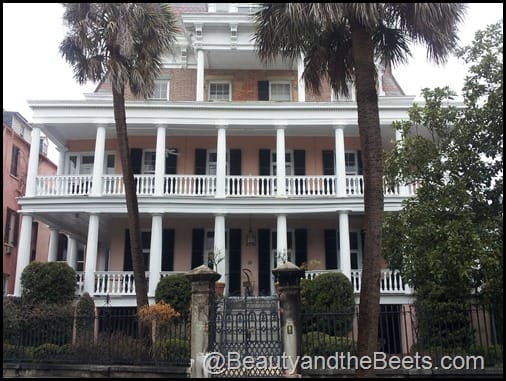 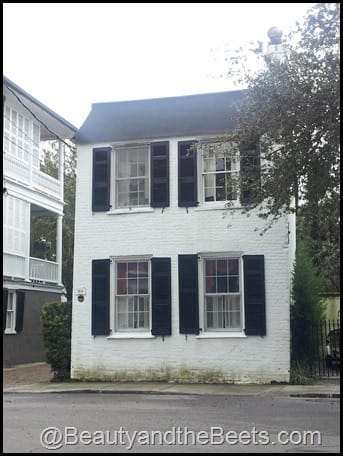 We knew the weather was going to be drastically warmer in the coming days so we decided to put off sightseeing and head back to the hotel to get some work done before we went to dinner.  I had found a place called Sesame Burgers and Beer which was just a few miles from the hotel.  The restaurant claimed to have the best burgers and onion rings in town, and they served black bean burgers.  We’re in. 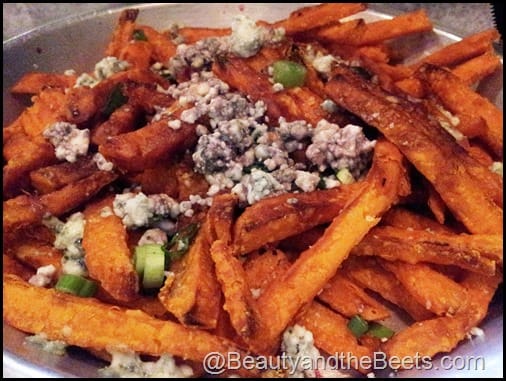 The restaurant was quite packed but the service was great.  We had a sweet potato and blue cheese basket of fries for an appetizer then we each ordered a three slider burger platter with three different burgers on the menu. 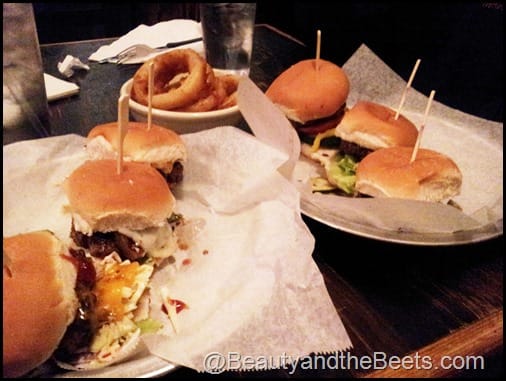 The food came pretty quick.  As I was snapping pictures, Chad realized we had never told our server we wanted the black bean burgers instead of beef.  So, of course, we were given beef burgers.  We sat there debating whether to even say anything or just eat the beef.  It was, after all, entirely our fault.  A manager noticed we weren’t eating and we explained our dilemma.  She insisted on correcting the situation and made us feel at ease (even though we both felt like idiots.) 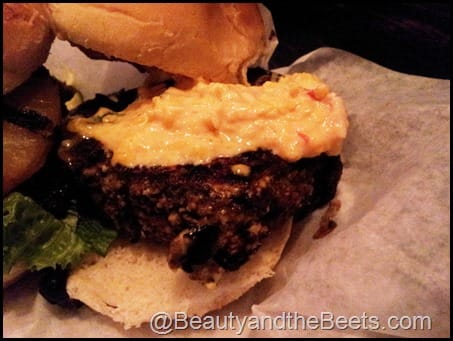 Well, round two of our burgers were delicious with the black bean patties.  My favorites were the Hawaiian Burger with the a big ring of pineapple and the Pimento Cheese burger.  Pimento cheese is everywhere in South Carolina.  Everywhere.  Every restaurant we have visited has had some variation of a Pimento cheese appetizer or entree. 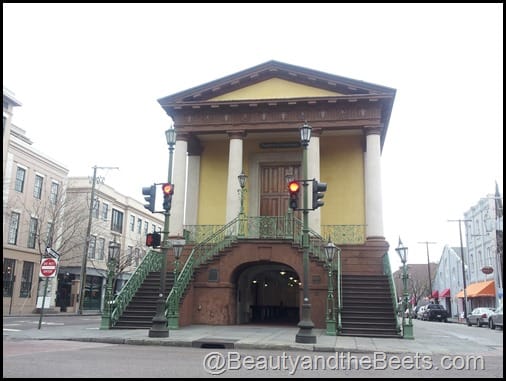 After dinner we called it an early night.  Chad had a little more work to do in the morning and then the afternoon was going to be dedicated to exploring Charleston and of course, finding some great grub for our last full day on the road.

6. The Great Ice Storm of Charleston

I would LOVE to have one of those old mansions :-)