It was September 14 and I was boarding a plane for Cleveland with Mr. Beet. We were going to spend one night in Cleveland before heading to Bloggy Con at Cedar Point in Sandusky, Ohio. And while in most places across the United States, September 14 was just another ordinary day, it was a very special day in Cleveland. A monumental day. 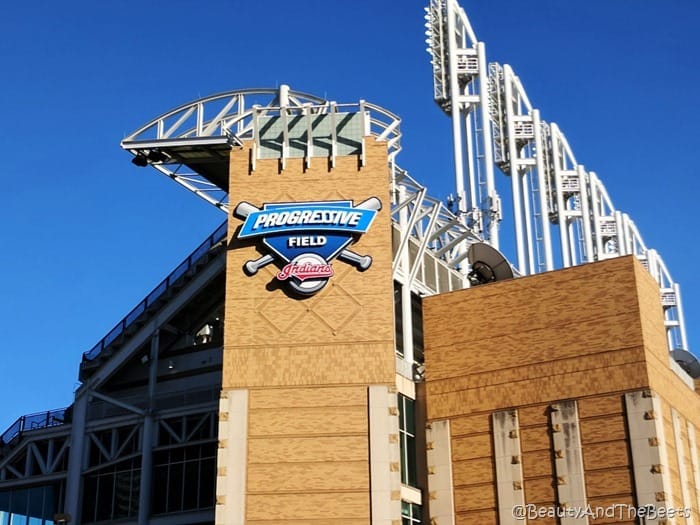 Anyway, Mr. Beet and I found ourselves in Cleveland for the night without an agenda, so we did what any tourist would do- we bought tickets to the Indians game. We hopped the red line light rail to Progressive Field to join 31,000 other baseball fans witness history in the making. 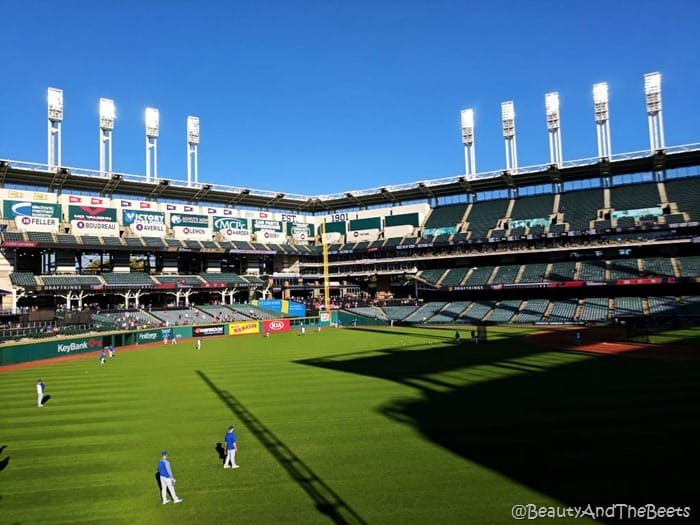 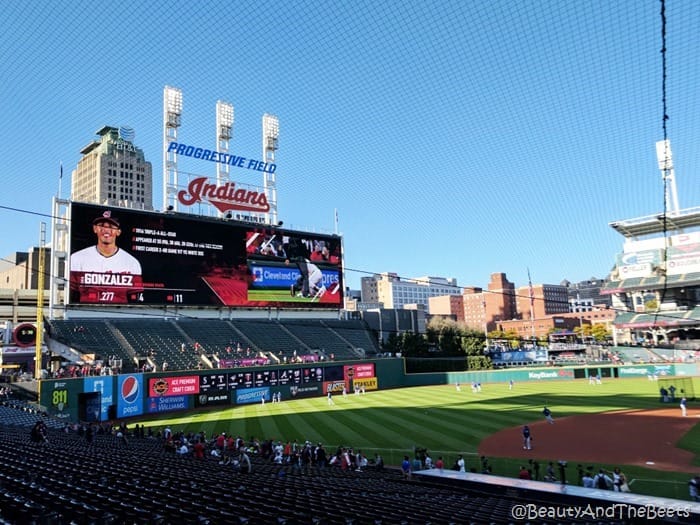 We got the stadium early enough to grab dinner. I had done a little research about the food available at Progressive Field and knew there were more options than just the usual hot dogs and nachos. There was actually a handful of local restaurants that have opened small stands within the ballpark. I actually found a hot dog stand called Happy Dog  that served very unique dogs- I went for the Slider Dog. I replaced the all beef hot dog with a veggie dog and it was topped with mac and cheese and Fruit Loops. Yes, those same Froot Loops you had for breakfast. I sooooo wanted to like this, and while the flavors were great together, the Froot Loops were so stale they were bothersome.  It ruined the whole dog. But no worries, there were still plenty of other places to eat. 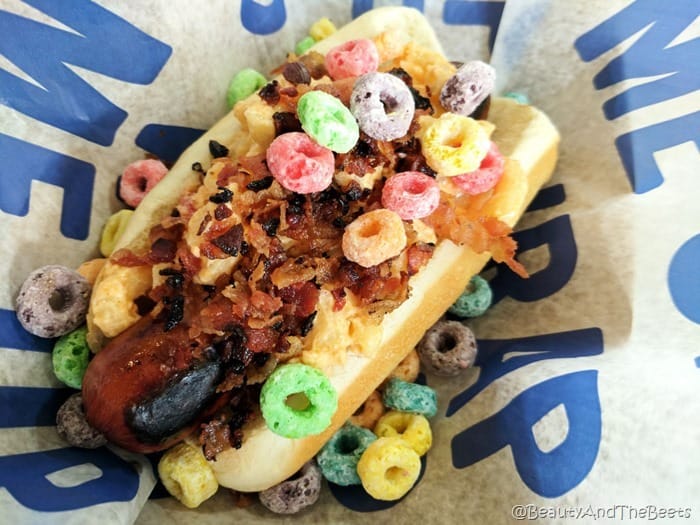 Mr. Beet tried the Street Corn Vegetarian Taco from Barrio Tacos. Their restaurants outside of the ballpark allow you to build your own tacos but Mr. Beet zeroed in on the Vegetarian offering here – a taco with street corn, chili lime butter, queso fresco, peppers, onions, pico de gallo, and chipotle crema. And he really liked it, even going back for a second one. 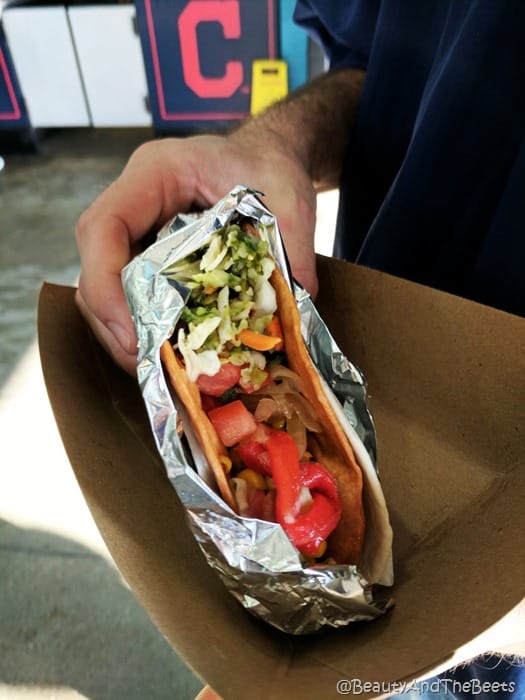 I decided to give the Melt stand a try, as we have eaten at Melt before on a previous trip to Cleveland. I chose the  Parmageddon – a sandwich built with a potato and onion perogie, fresh sauerkraut, sautéed onions, and cheddar cheese. And it was delicious. I think only in Cleveland would you find perogies on a sandwich. 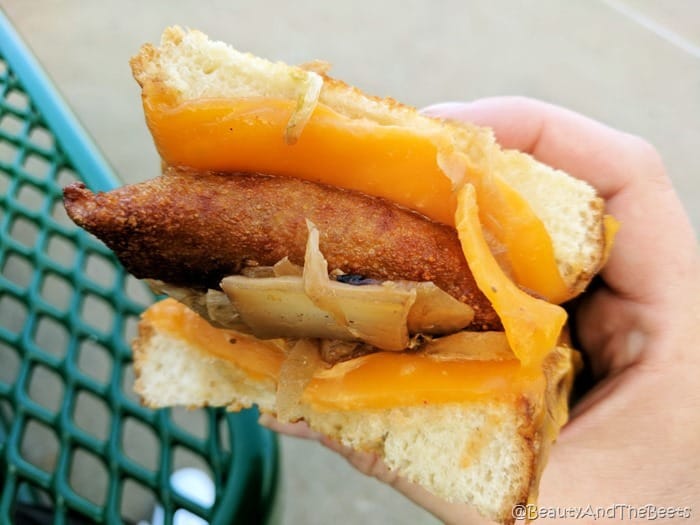 By then it was time for the game to begin. We had seats high above the first baseline, but we also had the most amazing view of the Cleveland skyline. 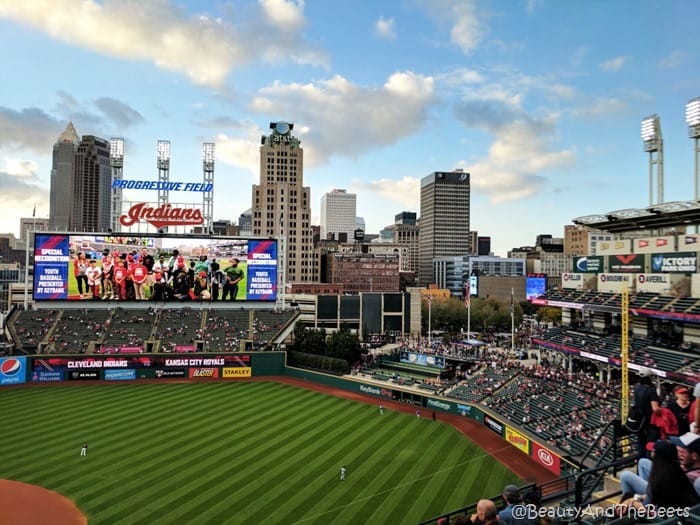 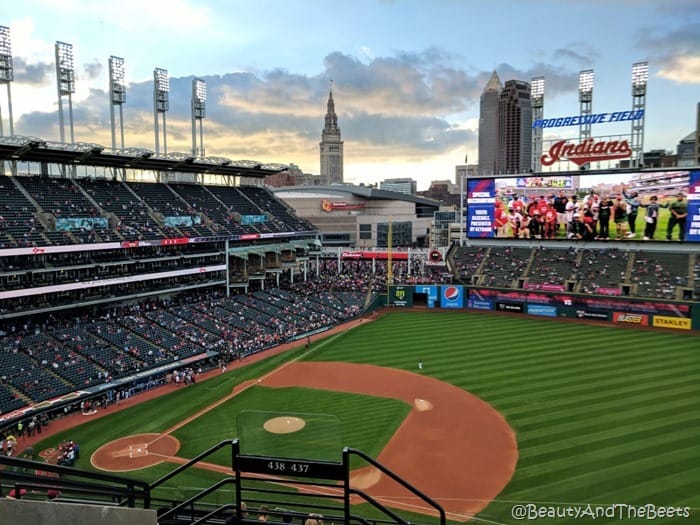 And even more spectacular was the sunset over Cleveland’s famed Terminal Tower. It was breathtaking to witness such a beautiful sunset over the skyline. 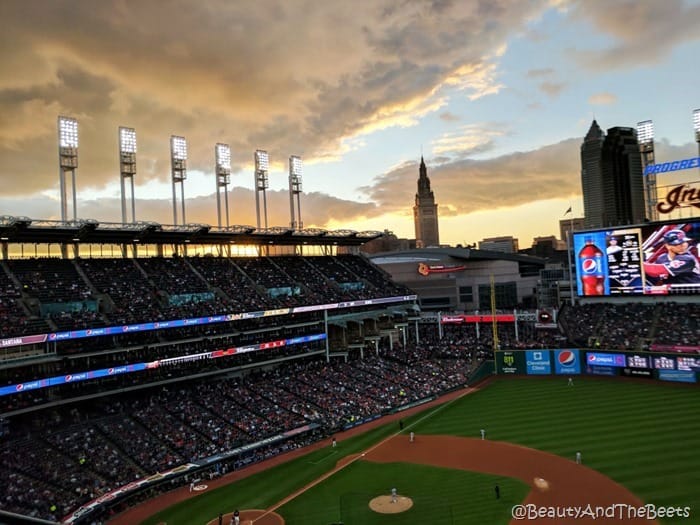 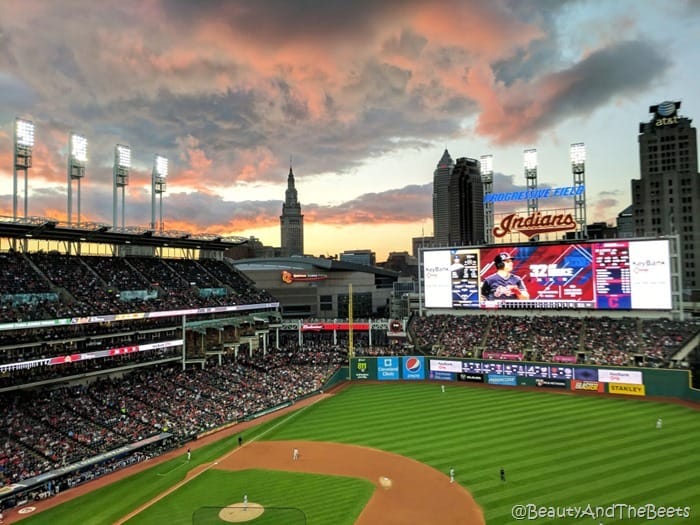 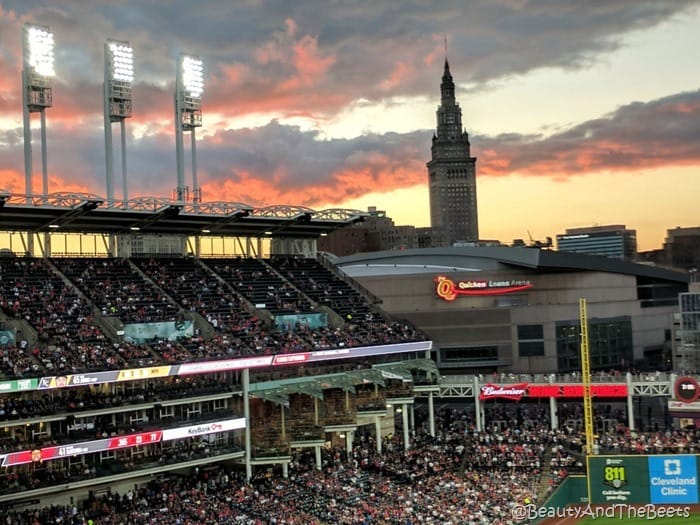 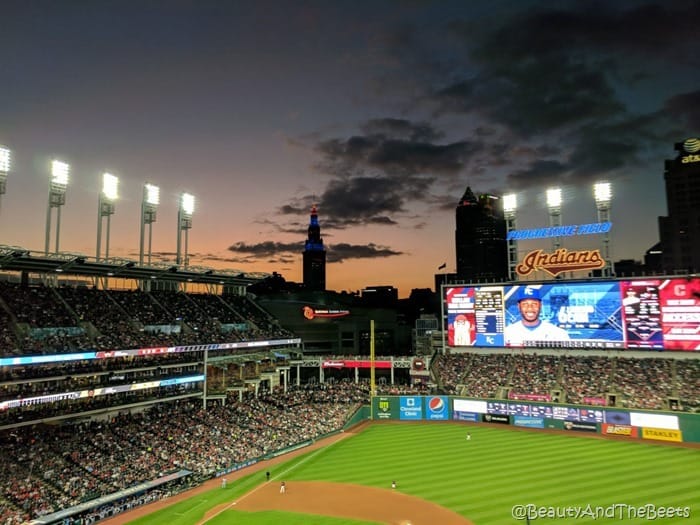 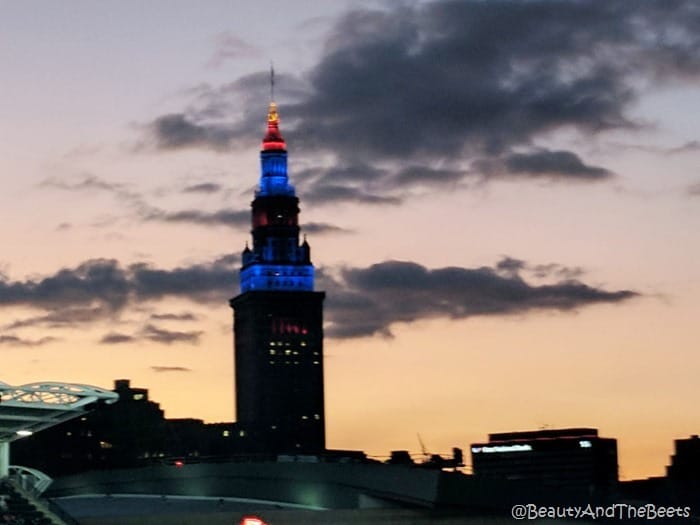 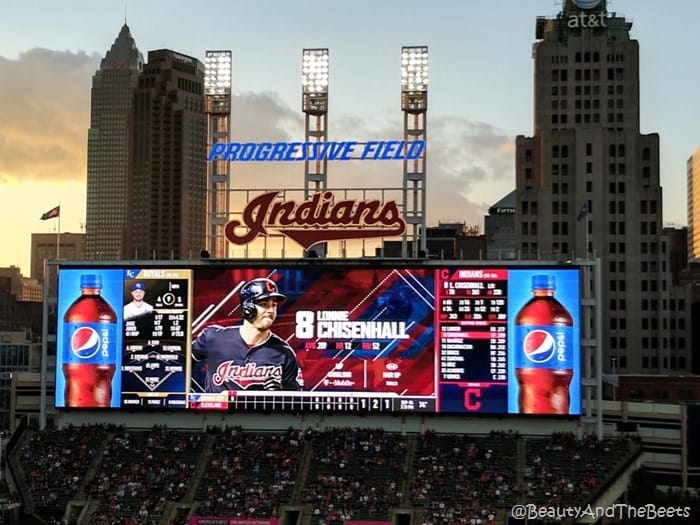 game was a good one. It was really looking like the Cleveland Indians were going to lose. They were down by one at the bottom of the ninth inning with two out and two strikes against the last batter of the game. And then, the Indians scored a base hit which allowed a runner to tie the game. The crowd was insanely wild. Everybody was on their feet and the Indians got the winning run in the bottom of the tenth inning. 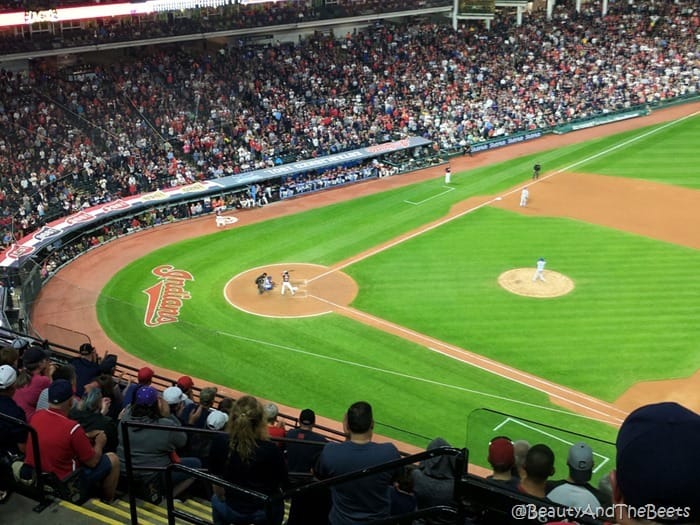 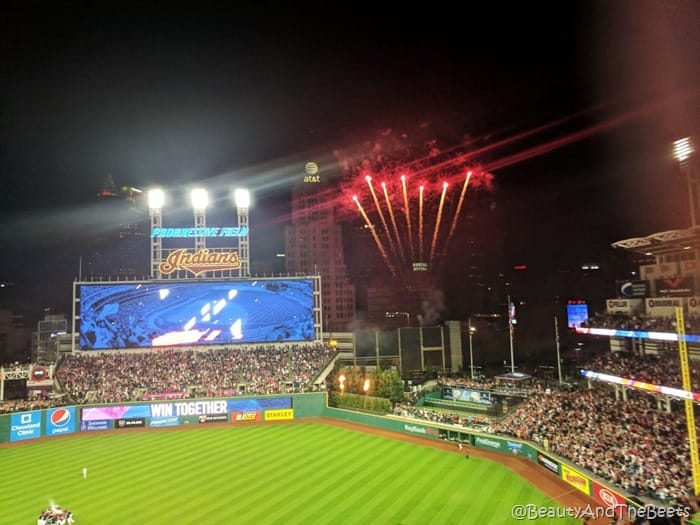 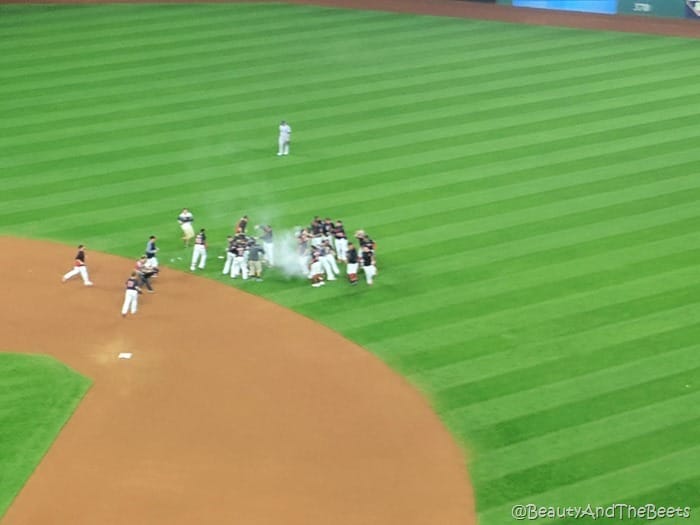 It was surreal to be standing there and seeing these crazed Cleveland Indians fans with tears in their eyes. You would have thought we were at the final game of the World Series. There were fireworks, champagne fights on the field, and 31,000 screaming and singing. 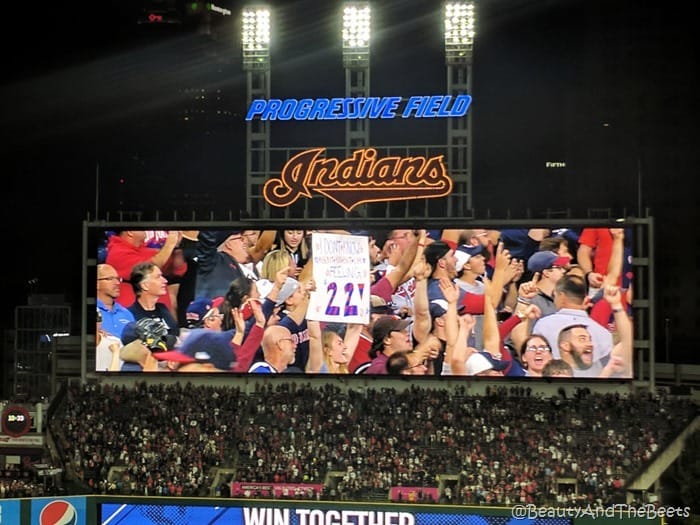 And the cheering didn’t end at the stadium. We enjoyed a very cheerful song and chant filled ride home on the train back to the hotel.

And then the next night the Indians unfortunately lost, ending their winning streak. So now the lucky number is 22 and it was so amazing to have been a witness to it. So am I an Indians fan now? Sure. Do I want them to win the World Series? Only if the Mets, Phillies or Orioles can’t pull it off.