I was recently invited to an evening of stampeding, horses, and a whole lot of country-fied fun at Dolly Parton’s Stampede in Branson, Missouri. The show is great, the rest of the experience was ok. Here is the lowdown on the hoedown and what to watch for. 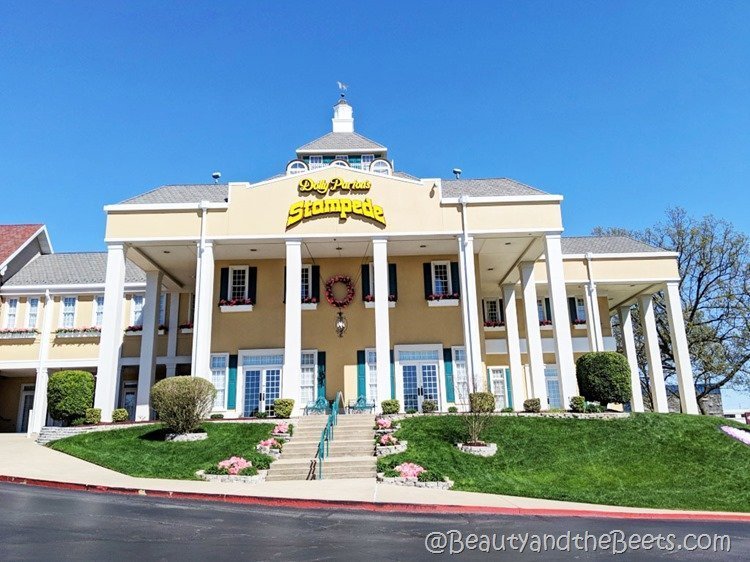 Dolly Parton’s Stampede is an icon in Branson

Dolly Parton’s Stampede has been a staple on the Branson show circuit for 25 years, with a sister location in Pigeon Forge, Tennessee (opened in 1988). Depending on the season, there could be as many as five shows a day so you will never have to worry about not being able to buy a ticket. The experience has been one of the most visited Branson dinner theater attractions since its opening in 1995. 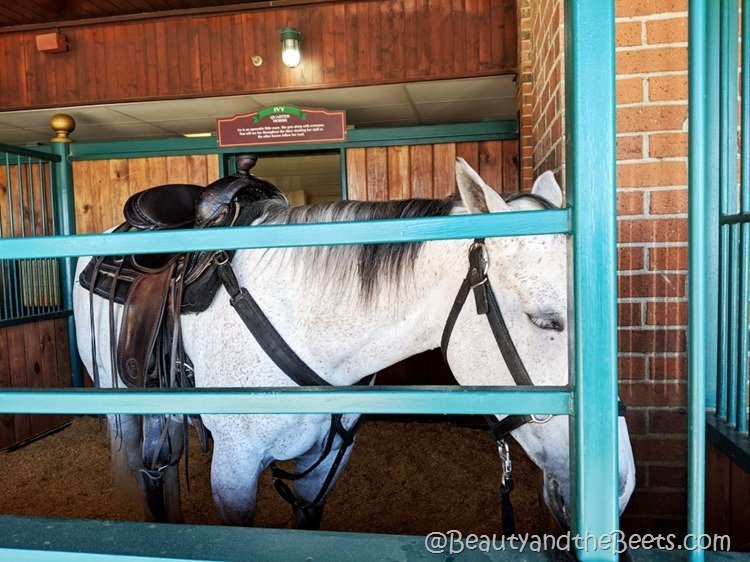 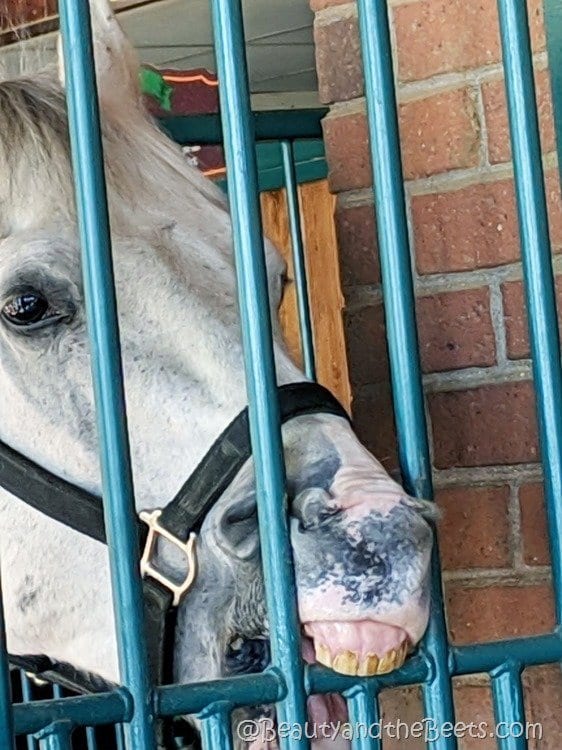 Get there early to see the horses

The stars of the show are 32 horses and you can see them up close before the show along the World Famous Horse Walk. I even got a horse to smile for my camera! 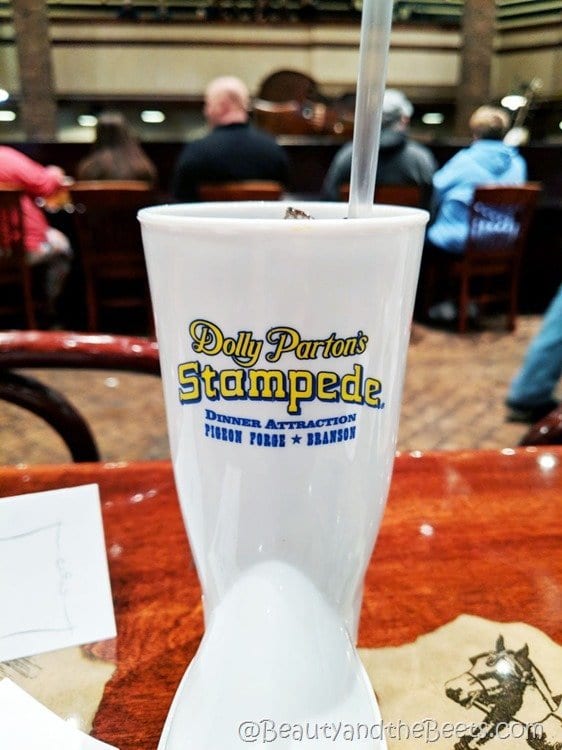 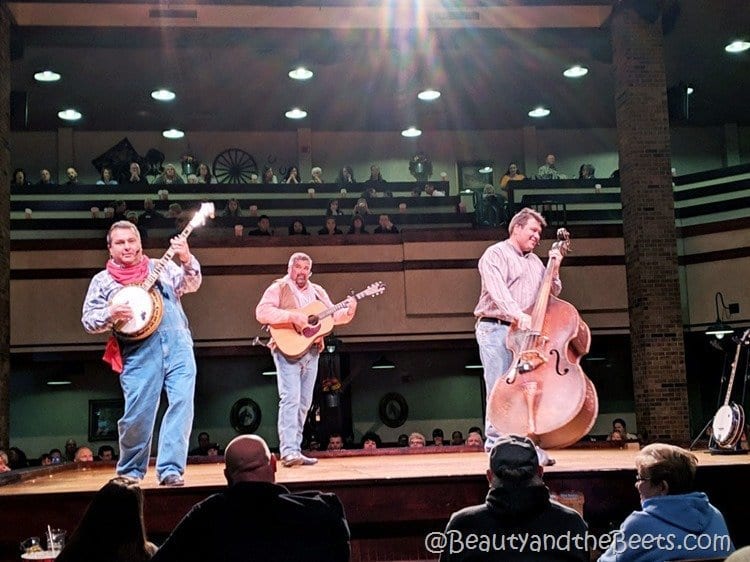 The White River Wranglers are three brothers who play the fiddle, the banjo, and the cello. Before you enter the main arena, you can grab some popcorn, a souvenir boot mug, and tap your toes to a mix of country, bluegrass, and gospel tunes before entering the dinner arena. (note: Dolly Parton’s Stampede does not serve alcohol. The pre-show beverages choices included sodas, juices, and mocktails. These drinks are not included in your dinner ticket, and you will want to stick with water if you are watching your sugar intake, as this was the only healthy non-sugar option.) 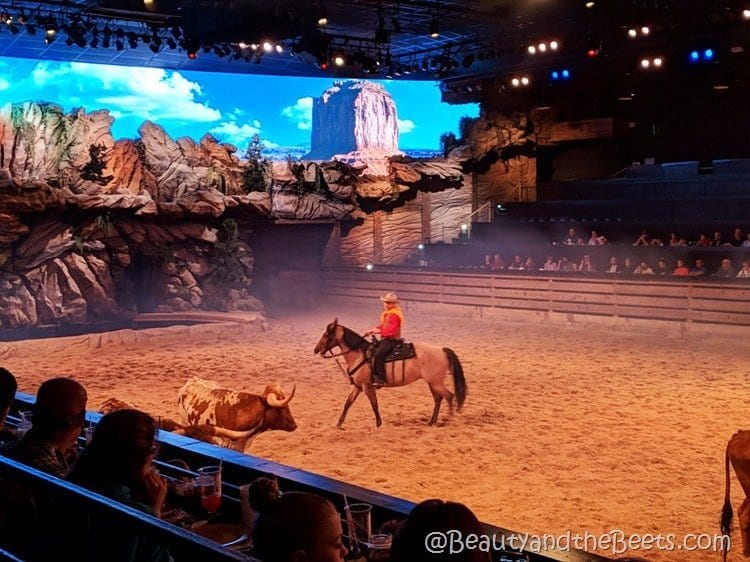 The arena is quite large

The 35,000 square foot arena can hold 11,000 spectators and they will pack you in. They will pack you uncomfortably in. Elbow room was scarce. The audience is seated at long tables that line the arena with about 30 people across. Maybe this is OK if you have kids at the table, but we were a group of 30 adults. I was so cramped I had to pull my chair far back from the table behind everyone else just to get some breathing room. 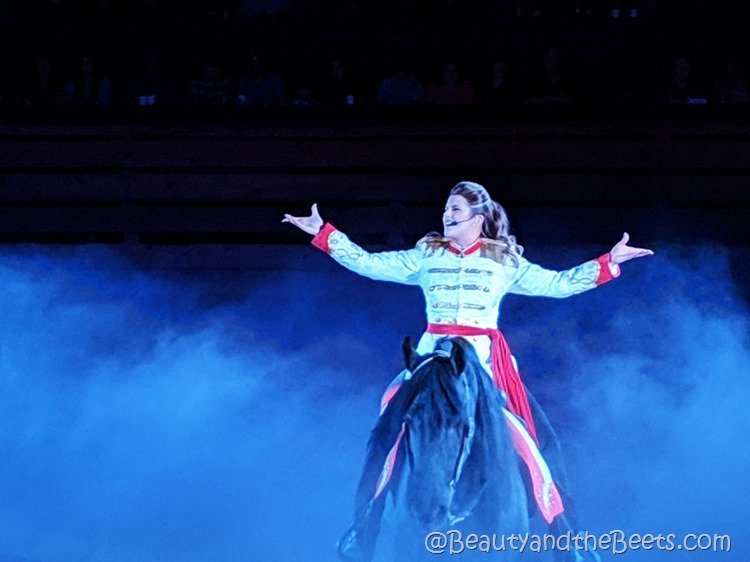 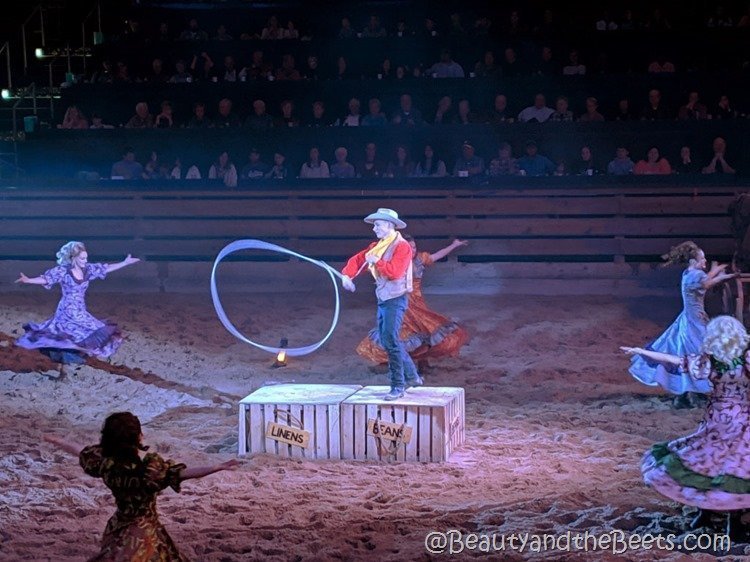 The show is fun

The large cast of horseback riders, dancers, and animals kept us entertained throughout our meal. The costumes and the lights alone will keep you entranced. Besides the 32 horses, there are also steer, pigs, dogs, and one dancing chicken named Nugget. 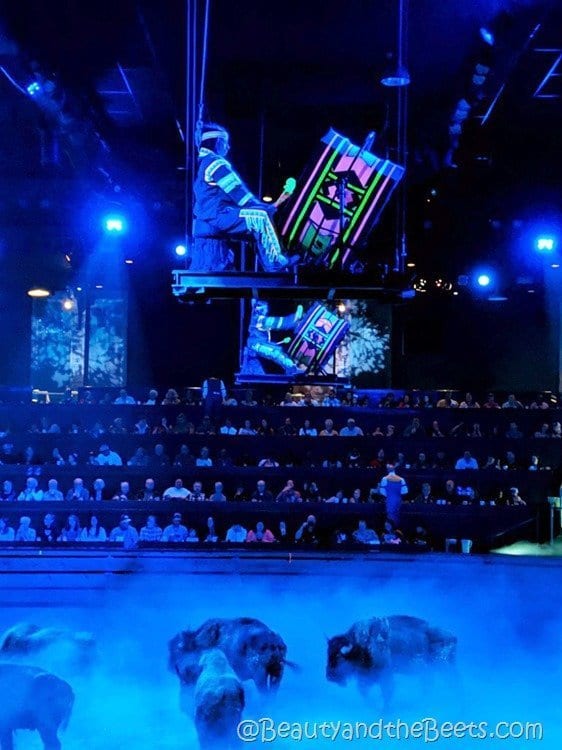 There is an element of Blue Man group during a black light drumming scene, and a flying acrobatic human bird reminiscent of The Lion King show at Walt Disney World. I was amazed at how well the horses and other animals knew their choreography. 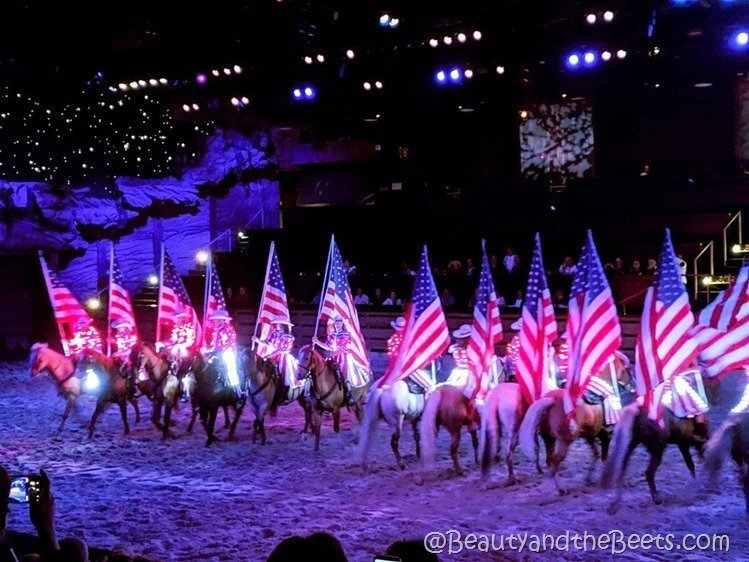 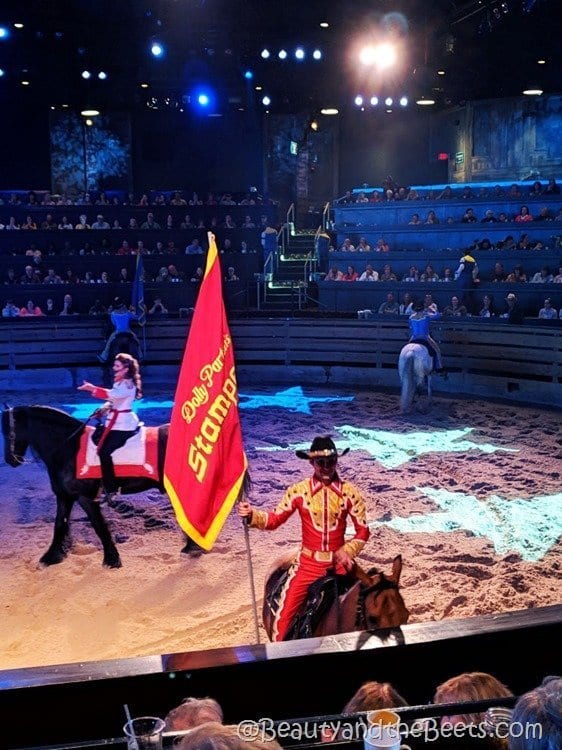 There was also a friendly competition between the two sides of the arena where the audience was separated into the North and the South. Members of the crowd competed in a horseshoe throwing contest and a water bucket filling race. The horse riders in the show raced in obstacle courses while the crowd stomped their feet in cheer.

At Dolly Parton’s Stampede Branson, the crowd does not clap like they would at a normal show. Instead, one stomps their feet in joy at the events unfolding before them on the arena floor. This is the “Stampede” in the show’s name. Also, it was easier to stomp your feet than try to clap when you are eating dinner. 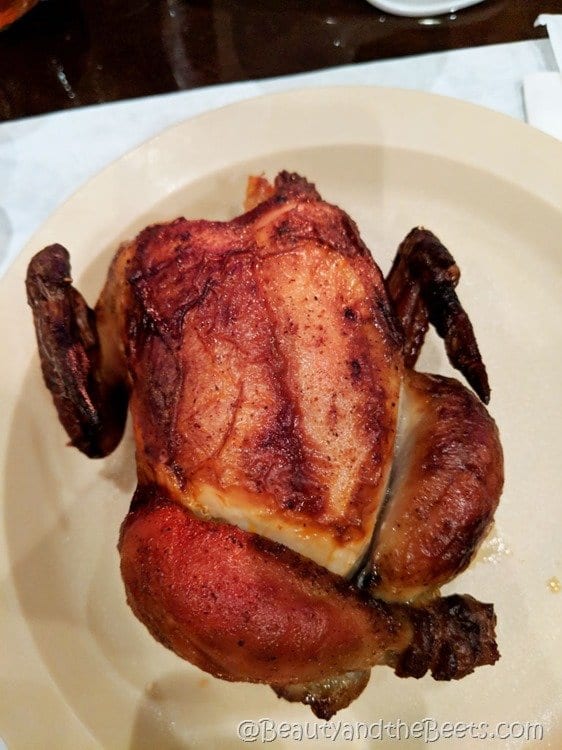 Here’s the scoop on the food

One’s thoughts on the dinner depends – if you can eat anything that gets put in front of you then you will enjoy it. Dinner is a four course meal that includes a creamy vegetable soup with a homemade biscuit, a whole roasted rotisserie chicken, smoked pork loin, a baked potato, and corn on the cob. I can tell you the corn was good. I can’t tell you how the potato was because as the server was moving down the line dropping food onto our plates, he passed right by me with the potatoes, though the two sitting on either side of me got one. We yelled as he passed but he never came back. I guess I can tell you others thought the potato was good. I was, however, rather put off by the fact that the server plunked an entire whole chicken down on my plate. I never laughed so hard in my life, I even named my little chicken. He was only missing his head. I recommend asking for the veggie option if a whole boned baby chicken is a turn off for you. (Bless us city folk, we are a finicky breed.) 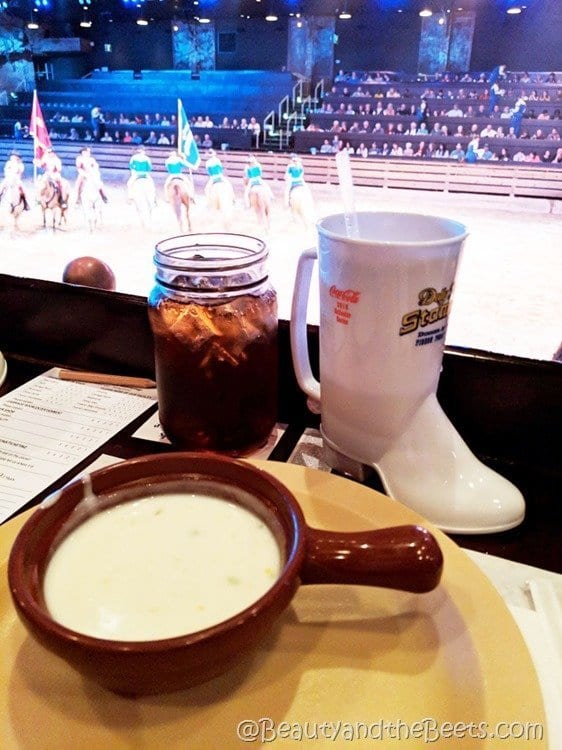 Why I can’t recommend The Stampede

Being packed in at the table like a sardine in a shiny tin can made the experience really unpleasant, but the staff made it worse by making a hugely critical error in the serving of the food. If you have any dietary restrictions, it’s tricky. You have to reserve special meals in advance and your server will know of your dietary restriction by the ticket you will present to them once you are herded into your seat. My guest had a veggie ticket, indicating that she requested an all Vegetarian meal. Instead of the whole bodied chicken, you are served a plate of pasta with tomato sauce. However, you are served everything else on the menu, including the soup, biscuit, corn, and potatoes. We later learned THE VEGETABLE SOUP IS MADE WITH CHICKEN STOCK. That is a ginormous unforgivable error for any restaurant to make. Many people have food allergies that will land them in the emergency room or worse, many don’t eat certain foods for their own religious or ethical beliefs. A Vegetarian who has not consumed meat for many years can get very sick by eating meat, just as a person with celiac disease can by eating anything with gluten. It is a restaurant’s responsibility to tell patrons what is in their food when it comes to allergies. If you visit Dolly Parton’s Stampede and request a special meal, whether it is Vegetarian, Gluten-Free, or any other dietary need, be sure to clarify once, twice, and three times with your server before you eat anything. To me, this mistake is so critical that I cannot, in good faith, recommend Dolly Parton’s Stampede. However, if you don’t have any dietary restrictions, enjoy the meal and enjoy the show. Unfortunately, the severity of the Chicken Stock crime warrants only one star on the Branson 5-star scale.

Click on any of the images below for more information on things to do and where to eat in Branson: 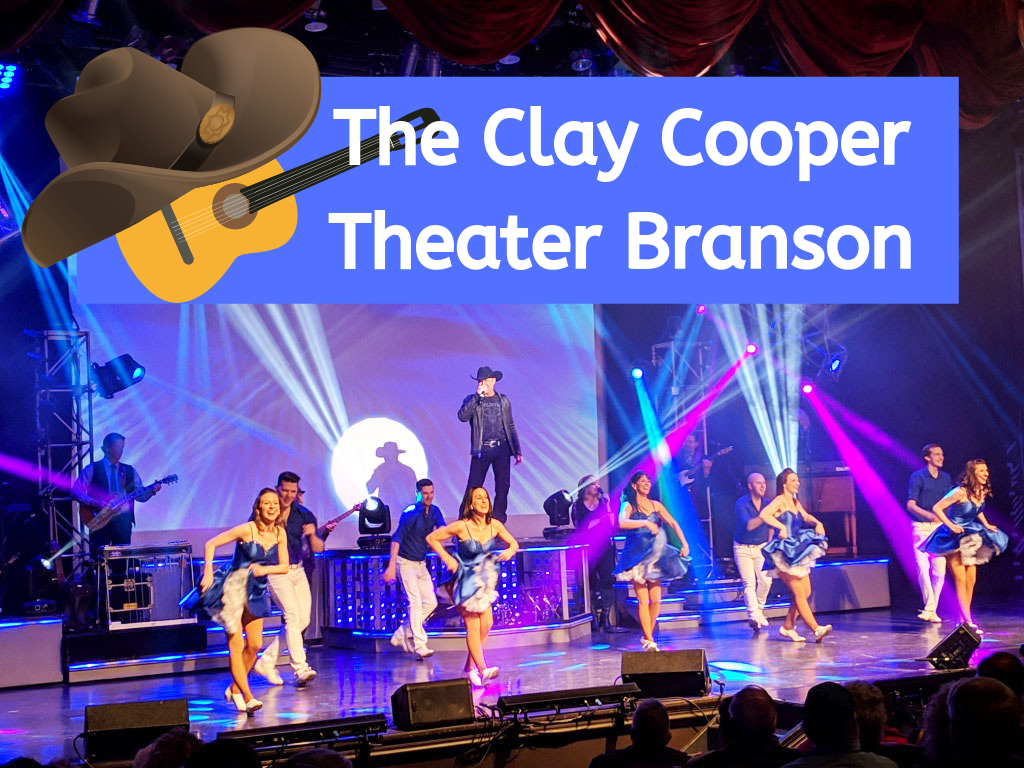 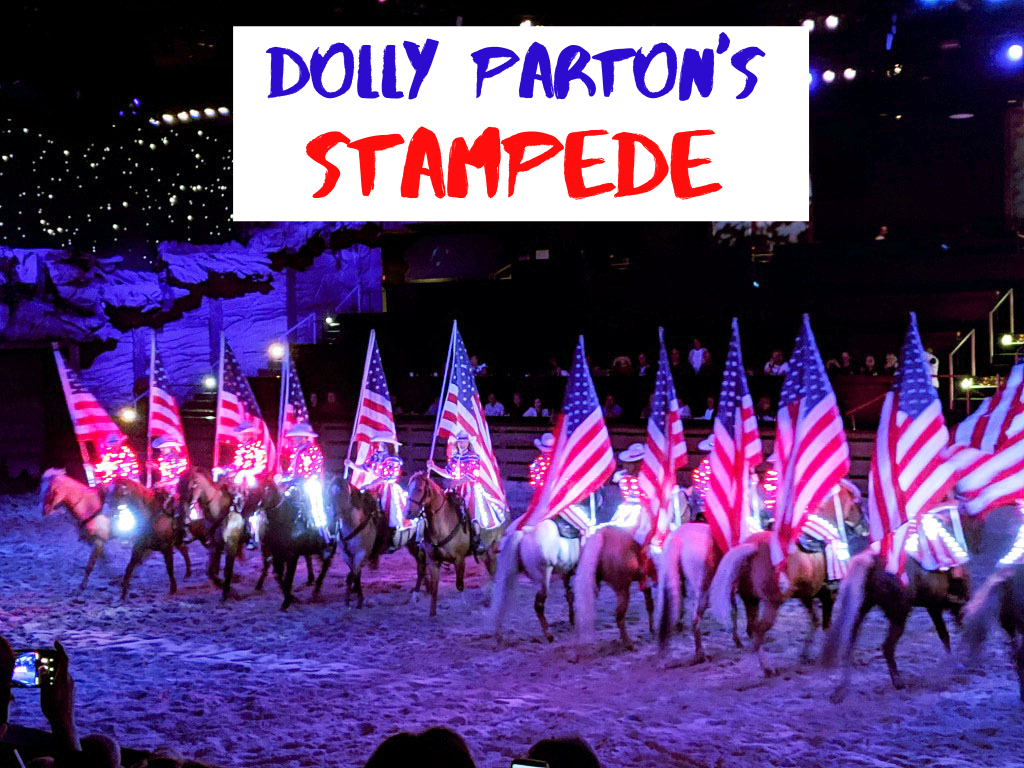 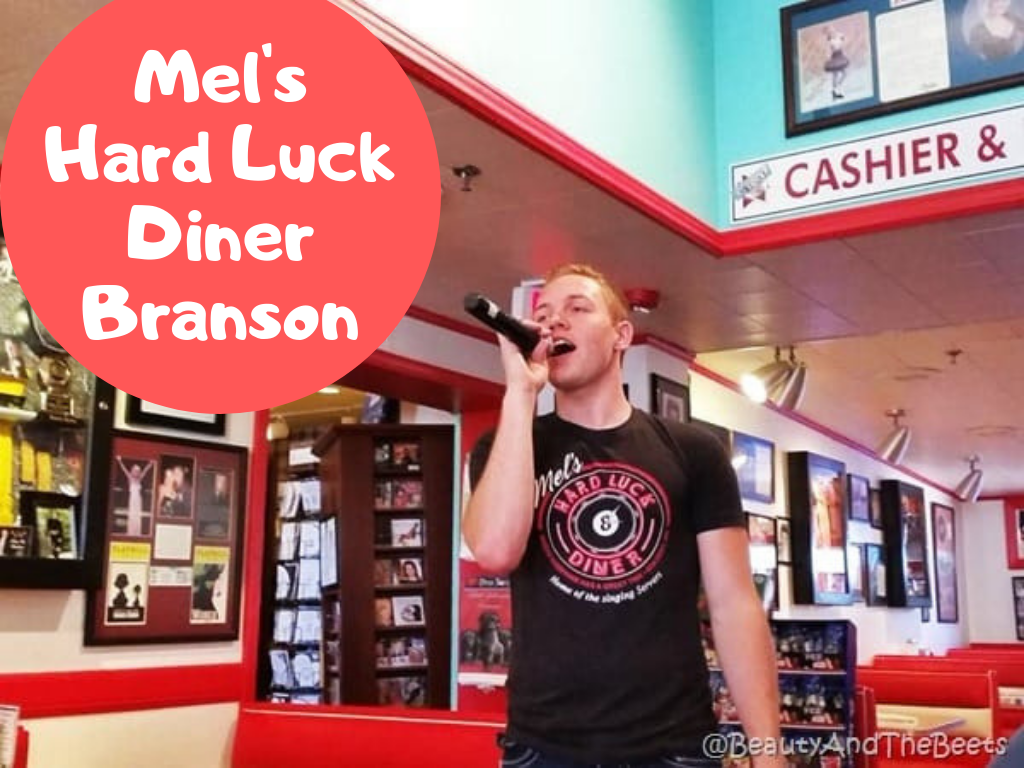 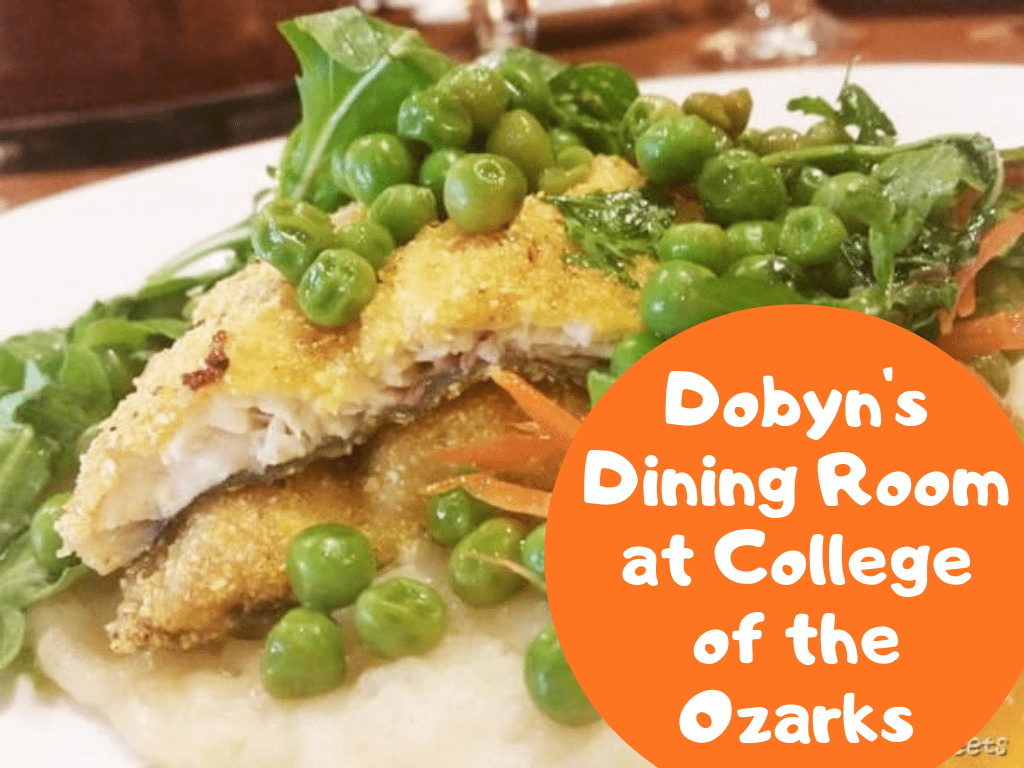 Disclaimer: I was invited to attend Dolly Parton’s Stampede as part a media event sponsored by #BloggingBranson and the Stone Castle Hotel and Conference Center in Branson, Missouri in exchange for coverage. No other compensation was provided and I arranged my own travel to Branson. All opinions are 100% my own.