I have a confession. I live 7 miles from the entrance of Walt Disney World, and I have been to the parks twice in ten years. I spent five years working there in the early 1990’s, first as part of the college program (back when it was an exclusive program), then later as a performer in the entertainment department. I was at Disney all the time as most cast members are, and eventually the magic just kind of becomes ordinary. Not that I don’t appreciate Disney, I do, but believe it or not, Walt Disney World is part of Orlando; Orlando is not a part of Walt Disney World. And I am not alone. Very few of my friends have an annual pass and very few have been to the park in the last few years. 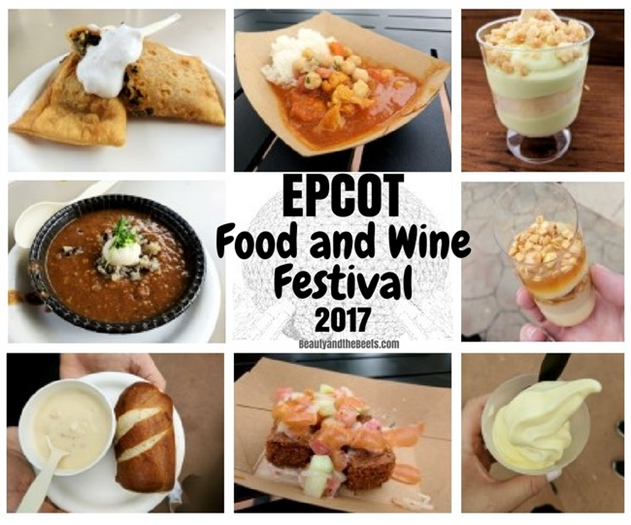 So, when I learned that my favorite band in the entire world was going to be playing at Disney as part of the EPCOT Food and Wine Festival, I knew I was going to spending a few days in the park. The Hooters played for two days as part of the Eat to the Beat concert series over Labor Day weekend, and Mr. Beet and I spent our days eating at the festival and our nights jamming to The Hooters.

Our first observation was that the Food and Wine Festival is not Vegan friendly, and the Vegetarian selections are hard to find. We were pressed to find a lot of food to eat. While I will eat meat occasionally, Mr. beet hasn’t had meat in probably 6 years, so I ate a lot more than him here. However, we decided to venture around the 35 booths in search of fun delicacies, and we found enough to satisfy both of us. This year there are 35 booths to celebrate the 35th anniversary of EPCOT’s grand opening. 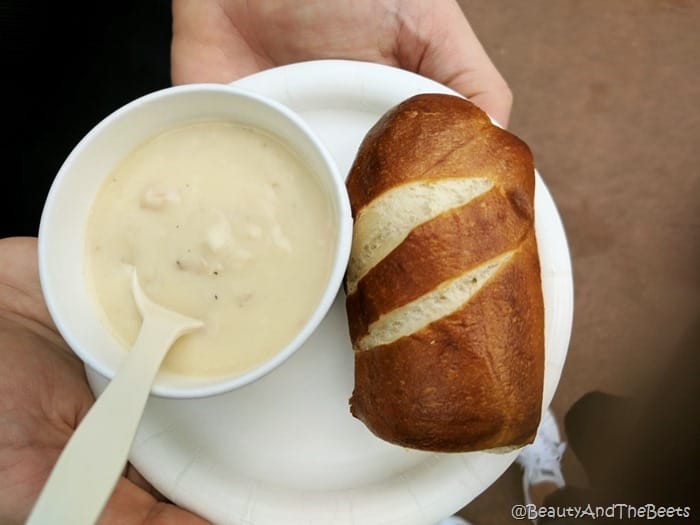 The first dish that everybody recommended (and by everybody I mean my friends who are all Disney-holics) was the beer cheese soup at the Canada booth. At $5, it was a decent portion of the soup with big pretzel roll on the side, but, the soup did have big chunks of smoked in it. It was good and I can see why it is ranked so highly on everyone’s recommendations. 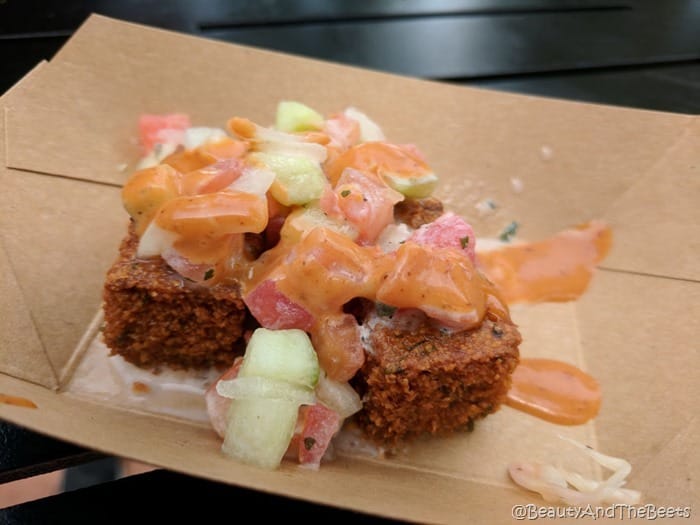 However, the Morocco booth had our favorite dish – the Spicy Hummus Fries with Cucumber, Tomato, Onions and Tzatziki Sauce. They were thick and super crispy. Whether you are a meat eater or a Vegetarian, these come highly recommended by THIS Beet. At $5, these were a great bargain. 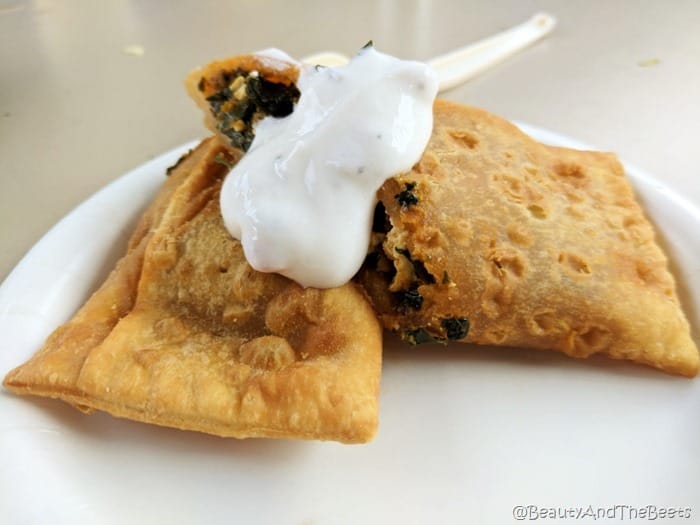 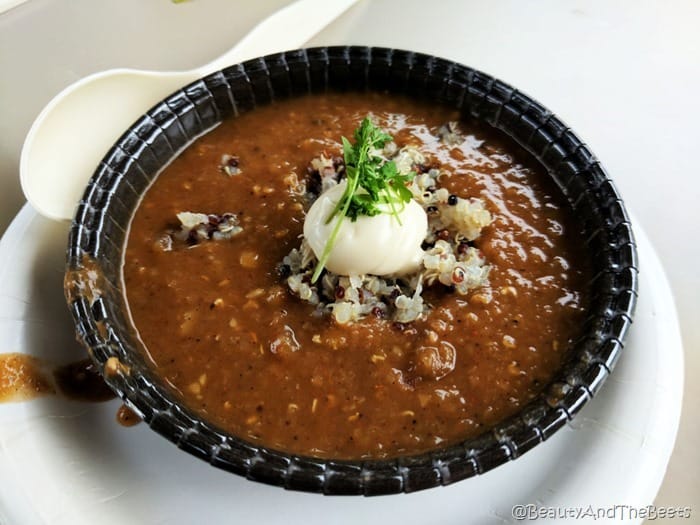 At the Africa booth, we tried the Spinach and Paneer Cheese Pockets with Mint Raita ($4.50), as well as the Spicy Ethiopian Red Lentil Stew with Vegan Yogurt and Quinoa ($4). Both were on the spicy side, but hearty. 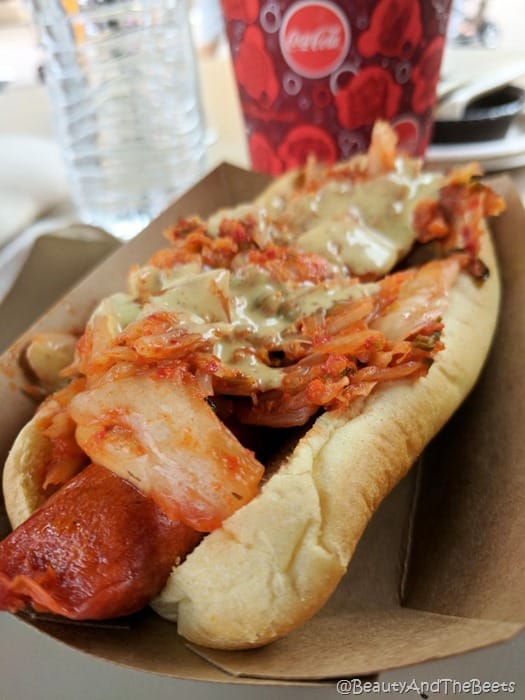 One dish I was most looking forward to trying was the Spicy Hot Dog with Kimchi and Mustard Sauce at the Refreshment Cool Port booth near the Japan pavilion. I am a sucker for anything kimchi, even on hot dog. This was the most expensive dish I tried at $6.50, however, it was also a full size dog as opposed to sample like the other food at the festival. By far, my second favorite dish behind those hummus fries. 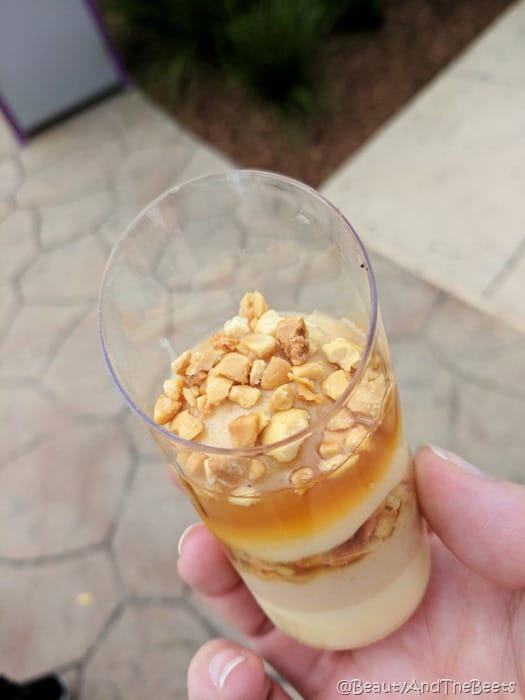 Heading over to Showcase Plaza, in between Future World and the World Showcase areas, we had the Peanut Butter and White Chocolate Mousse with a Caramel Drizzle ($3.50) at Earth Eats…. 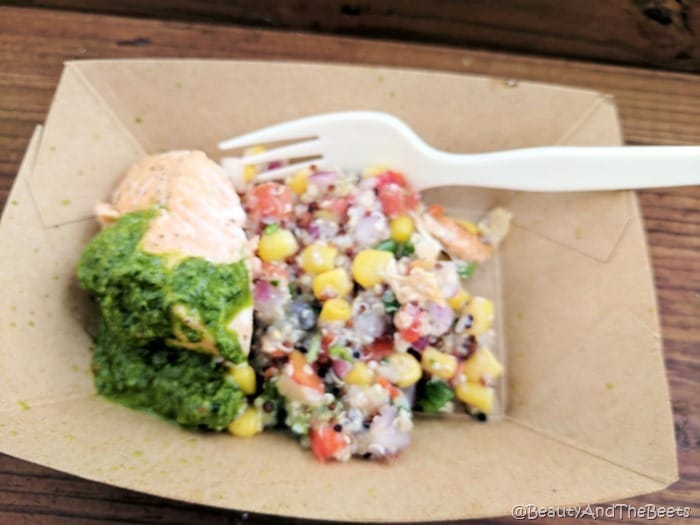 and we moved onto the Roasted Verlasso Salmon with Quinoa Salad and Arugula Chimichurri ($5.50) at the Active Eats booth. 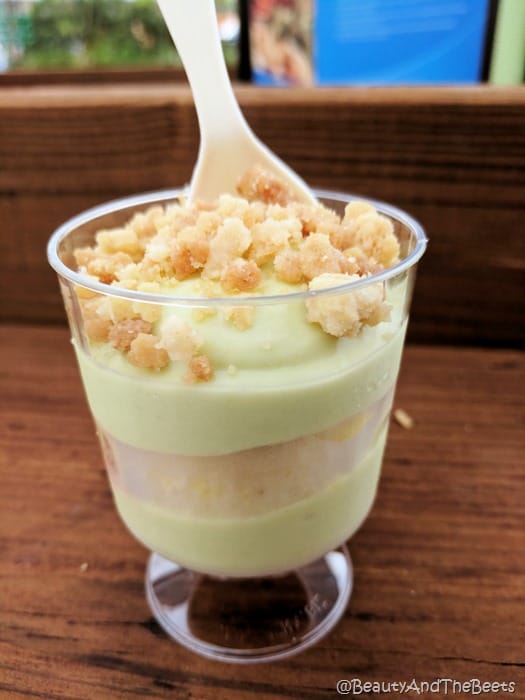 We also had the Sweet Avocado Crema with Strawberries, Yellow Cake and Tortilla Streusel ($3.75), also at the Active Eats booth. It was a pretty decent size, and not as sweet as you think, but quite tasty. 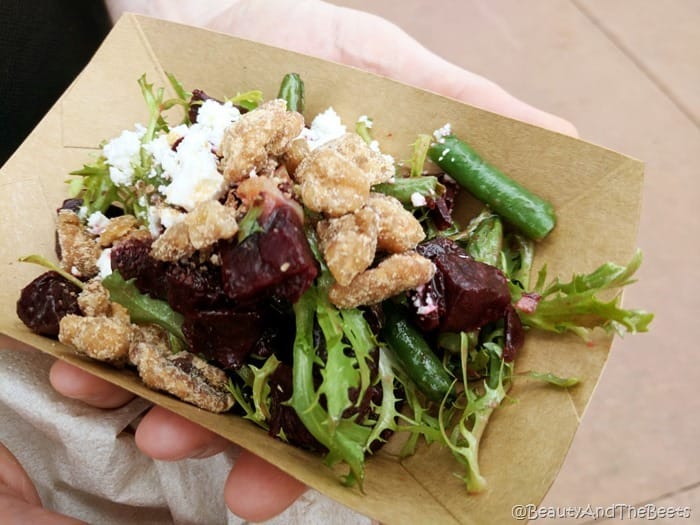 Mr. Beet found the Roasted Beet Salad with Green Beans, Feta Cheese, Minus 8 Vinaigrette and Toasted Walnuts ($3.75) to be quite delicious. Minus8, by the way, is a tomato and grape vinegar from Canada. This is one of the few dishes that can be made Vegan by removing the feta cheese. 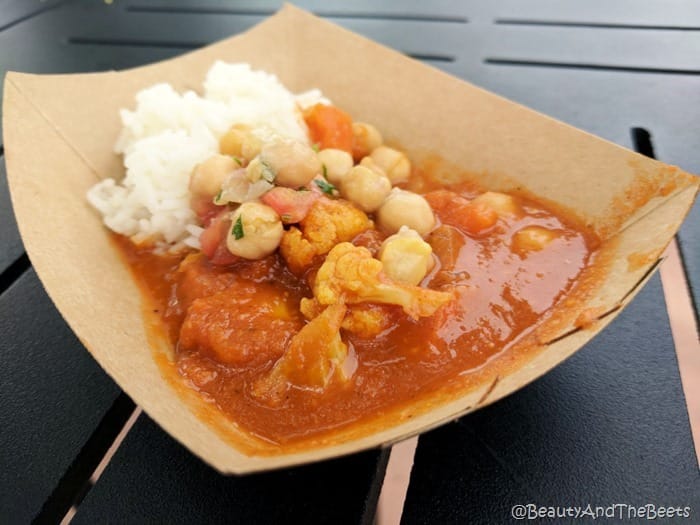 Another Vegan dish was the Madras Red Curry with Roasted Cauliflower, Baby Carrots, Chickpeas and Basmati Rice ($5) from the India booth. It was spicy as most Indian fare is, but not too overpowering. 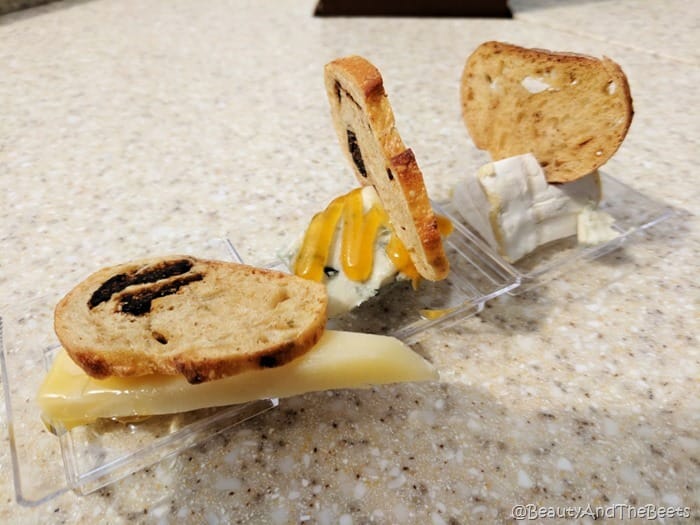 Over near Future World are the cheese and chocolate booths where I loved my Trio of Artisan Cheese sampler ($5.25) with cheeses and condiments like the Point Reyes Original Blue served with Apricot Jam. 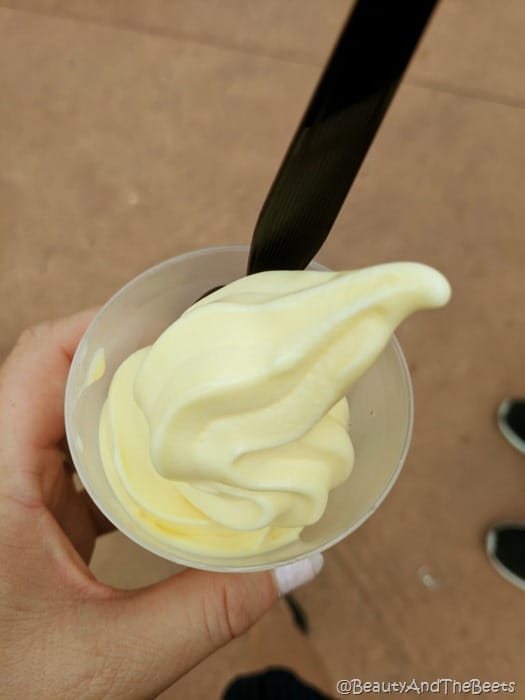 Each booth also features wine, beer and liquor samples as well, hence the wine part of the Food and Wine Festival.

We had thought we were going to be able to eat a lot more, and while it seems like we did eat a lot, we also spent two days there. I wish I would have tried the Escargot Croissant from France, the Olive Oil Cake from Italy, and the Lime Orange Cotton Candy from the Light Lab in Future World.

The EPCOT Food and Wine Festival is here until November 13. Admission to see the musical acts at the Eat to the Beat Concert series is included with park admission. For a list of upcoming acts go here –> Eat to the Beat Concert Series. And here is a little hint: to get upfront to see your favorite musical act, grab a seat early before the first performance inside the American Gardens Theatre by the American Pavilion. They will allow you stay in your spot for the 5:30pm show, but then will ask you to leave and join the standby line for the 6:45 and 8:00pm concerts.