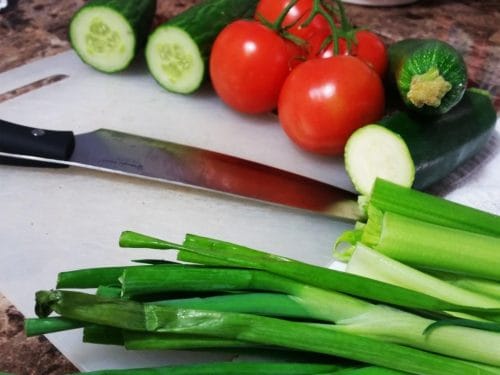 Forks Over Knives is a horror movie. Not your typical horror movie- there aren’t any monsters or mass-murderers jumping out from the dark- but there is horrifying information in it. As a wanna-be-vegetarian/vegan, this is a movie I have wanted to see since it came out last year. The release was small, only playing in certain cities. Now it has been released nationally and Chad found it on our Hulu Plus menu.

This movie focuses on the benefits of a whole foods plant-based diet. I thought I was going to see baby chickens getting their beaks chopped off or cows being slaughtered. That wasn’t the case at all…..this movie was even more horrifying.

Here is what I learned:

Seriously, these statistics scare me.

This movie is a documentary that follows 2 American doctors who say that changing your diet to a whole food plant-based diet can reverse illnesses like cancer, diabetes and heart disease.   That’s right- reverse!

I guess there  is a reason why our food pyramid with the basic four groups has disappeared. Now we have My Plate. However, meat is still a large part of this diet- and- our country representatives are getting huge kickbacks from the meat companies to keep meat and processed food in the mix of what we should eat. Who do we believe?

Forks Over Knives has me really thinking……….

We need to choose forks over surgical knives!

I know Chad and I are now making some huge changes! In addition to meat and processed foods, we are going to slowly start cutting out milk and cheese. I am going to do much more research and post my findings next. Stay tuned for more information…. Who’s with me?