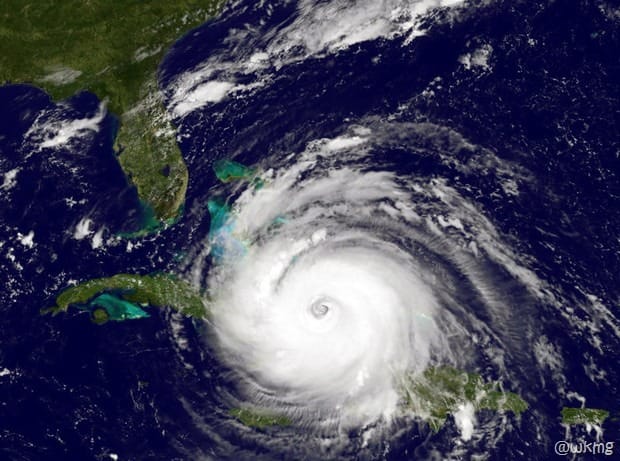 Hurricane Irma was just a hoot. She couldn’t decide which coast to visit in Florida so she put the whole state in a panic. Residents from the East coast of Florida evacuated to the West coast, then when Irma decided the West coast  was more to her liking, all those people fled back to the East coast, followed by all the residents of the West coast.  I started scoping out hotels up north when Irma was still 5 days away from us and the hotel space in Atlanta was scarce. We were able to book a room at a Red Roof, a hotel chain we commonly stay with because we can travel with our animals.

However, Irma decided to stay further out east, so by Thursday we cancelled our room. The eastern side of the storm is always the worst, dubbed the “dirty side” by one of our local meteorologists. The eastern side is where the tornadoes and heaviest winds and rain camp out. It was looking like the eastern side was going to stay out to sea and we were going to be OK, so we cancelled the room, honestly figuring the people in Carolina, who were now in line for a direct hit, were going to need the room more than us.

Then she shifted further west. And put us on that dreaded dirty Eastern side. So, we did what everyone else in Orlando did. We stocked up on bottled water, chips, crackers, and cookies. We installed the Zello app onto our phones so we could communicate with each other in case we lost cell phone coverage. We filled our cars with gas. We took inventory of who had fled and who was “hunkering down”. We developed a drinking game where we took a shot every time someone on the local news said “hunkering down”.

I gathered some of our belongings in case we had to flee suddenly, and placed them in a bag next to the garage door. Items like food for the animals, medicine, ID’s and credit cards. And cherished items like the ashes of my beloved animals who recently passed, some jewelry and photos. Plus a change of clothes and rain gear. 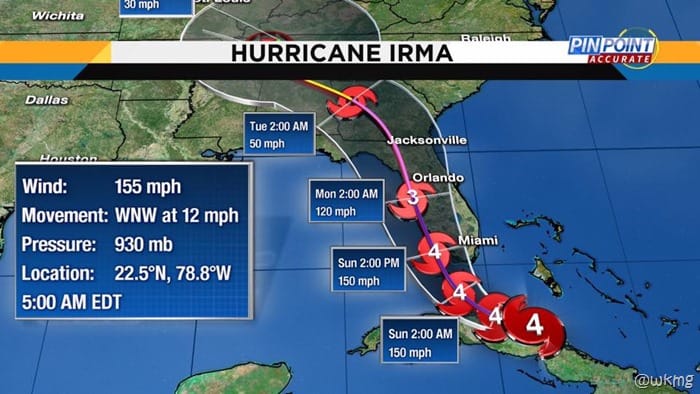 As the storm got closer, we stayed glued to our local TV station for updates on the path. I think Hurricane Irma was taking a drink every time she heard hunkering down too. That thing wobbled like a college kid on St. Patty’s Day. We fully anticipated losing power so we spent about three days eating everything we had in our freezer. I swear if I never touch a frozen vegetable again it will be too soon. I did try to get creative and made these gumbo vegetable quesadillas. 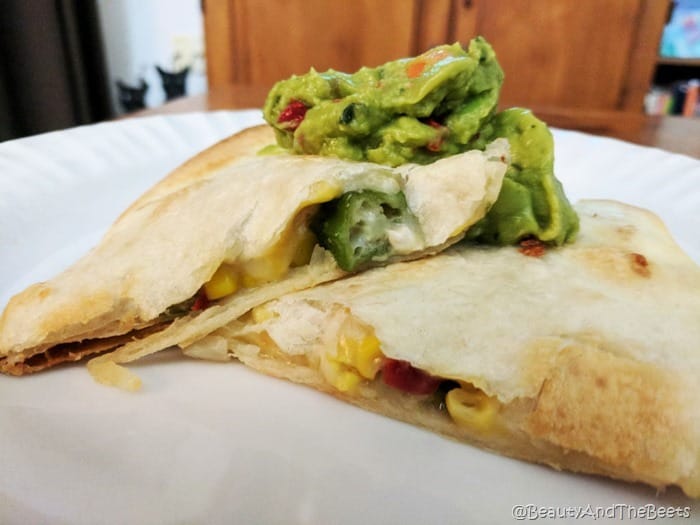 The day of the storm was pretty uneventful. By this time, the city of Orlando was basically on lockdown and all the stores, gas stations, and airports were closed. Every hotel room in the city was booked from all the evacuees on both coasts. Those of us inland in Central Florida had been encouraged to stay at home in order to keep the roads cleared for those who needed to leave the coasts. I spent the day trying to knock out a bunch of my schoolwork as I was fully anticipated losing not only our power, but our internet as well. 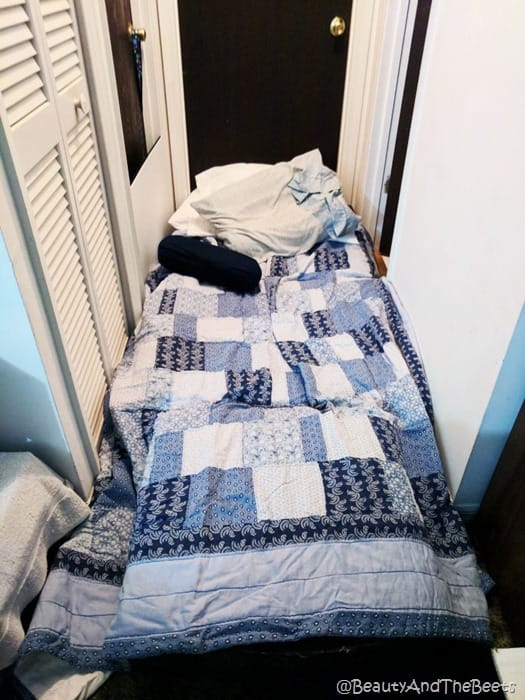 By 2pm, the rain had started to fall and the winds had picked up. By about 7pm, it was no longer fun. The winds were getting scary and tree branches were starting to swirl around the streets. We decided to set up a makeshift bed in the hallway leading to our bedrooms. We set up blankets over the couch cushions, grabbed our pillow and hunkered down. By this point, many Orlandoans had already lost power. Lucky for us, our power had been flickering but remarkably was still on. So we settled down into our little makeshift cocoon and found a local tv station live stream on the computer. We completely ready for a very long, very dark, and very hot night. We were so afraid to lose air conditioning – first world problems, I know. But it was a lot easier to worry about losing air conditioning than worrying about the roof peeling off.

We set the animal cages up in the bathroom right next to us in the hallway, complete with a litter box, food and water, and even a few toys for the animals.  At first we just kind of chilled out, watching the live stream and hanging out on Facebook.

However, once the storm got bad, we grabbed our “flee” bag and placed it into the bathtub; and I decided to put the girls into their cages. What would we do if the roof did cave in and I couldn’t find my kids?

Then exactly what we didn’t want, or need to happen, happened. Our worst nightmare. Hurricane Irma turned east again, this time heading right into Orlando. And like I said, the eastern side was the worst side of the storm to be on. But the northeastern side of the eyewall is the absolute deadliest and it was heading right towards us. We had nowhere to go. 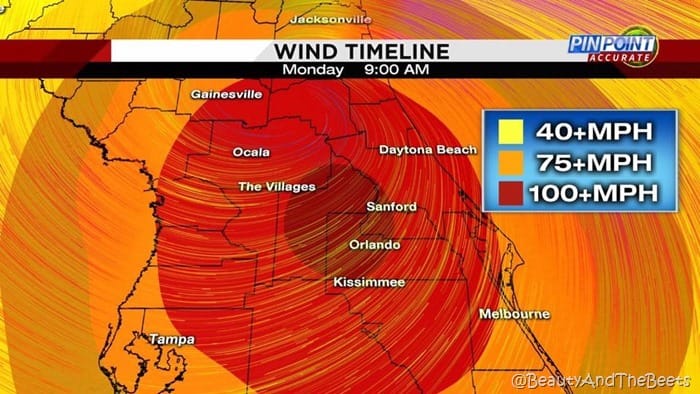 The winds got worse. I could hear things hitting the windows and there was a constant thumping on the roof. I have been through many hurricanes before, but never one this severe, and never one this scary. The lights were messing with us, they would go off and I would think this is it. Only to have them pop back on after 30 seconds. Not that I am complaining. We were super fortunate to have our power remain on during the entire storm. However, we could see the neighborhood just behind us was completely in the dark. And every time we snuck a peek out the window, the sky was constantly illuminated with giant flashes of blue light, transformers were exploding all around us.

The only thing bringing me  comfort was the fact that we were still connected to the outside world through the internet and by watching the live stream of the local news. Our local TV stations were broadcasting very moment of the storm throughout the entire night. We were able to watch this eyewall approach us in real time and we knew exactly when we were going to get hit and how bad it was going to be.

Frankly, I didn’t think the house was going to survive the impact the eyewall. Not just our house, but every structure in the city. We were fully surrendering to the fact that our city was going to be in rumbles. And it’s not that this is what was being told to us by the local news, we were just being warned that this storm was completely unpredictable and we just didn’t know what to expect. So we braced. And held our breath while the air pressure dropped because our ears were popping.

I watched the eyewall roll right in over my neighborhood and for about half an hour I just stared at the ceiling, waiting for that thing to peel right off. I literally had my kitten’s paw in mine as she sat in the “safety” of her cage just watching me.

Then suddenly, the rain stopped, the winds relaxed a bit and I knew we were in the eye. However, what we didn’t know is that eye actually disintegrated over the city of Orlando and the storm began to fall apart. In a well defined hurricane, the calmness of the eye is usually followed by another chaotic episode of winds and rain. However, the rains never really returned. The winds stayed pretty consistent for a while, still at 80 mph it was scary. But I felt like we could breathe just a little bit.

We managed to sleep for about 15 minutes in the hallway. It wasn’t until about 6am that we felt comfortable enough to move our little shelter into one of the bedrooms. And we were able to let the animals have a little bit of freedom. We slept for another 3 hours before we woke up and began to access the damage. Though we were still on a curfew restriction (meaning we were not allowed to be out on the roads), we did step out of the house for a few minutes. We were incredibly lucky, while there was debris and branches all over, our house was still intact. No broken windows, no damage to the roof, and no water leaking inside. We fared better than most in the area. We just have a lot of branches to pick up. 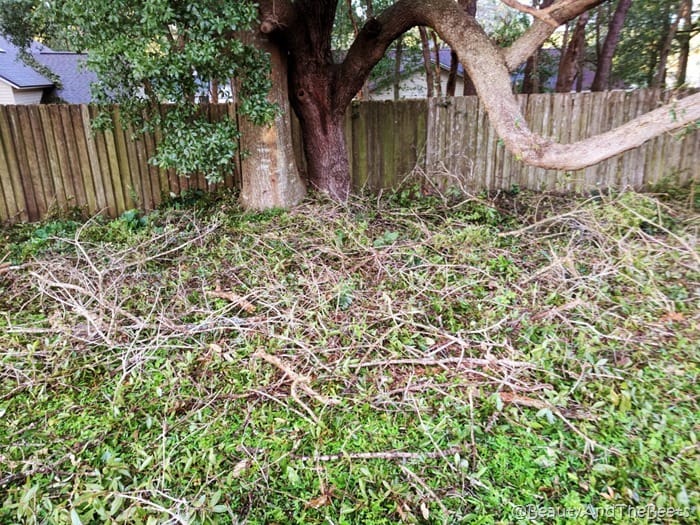 However, there is a lot of clean up left to be done. Not just with us but all across Orlando. I have friends who are not expected to have their power restored for a week. I have friends who will have to canoe themselves around their neighborhood just to get out of the house. My college is not planning to open until next Friday and I imagine that will be the norm around here. Even today, two days after impact, most places in Orlando are still without power. The few Starbucks that are open have lines a mile long, gas stations still have no gas, grocery stores are still without power, and those restaurants that do have power don’t have food to serve. Irma definitely won’t be forgotten anytime soon.

I am scheduled to speak at BloggyCon this upcoming weekend at Cedar point in Ohio and I am hoping the airports will open in time for me to catch my flight out. However, there is another hurricane lurking in Irma’s wake. We are all collectively directing our breath to the east in hopes that Jose gets the hint and stays away.

Oh, and one last thing….. to those of you up north who have said you would have evacuated sooner…where is it that you would have gone? Hotel rooms were hard to come by. And how would you have left?  The roads were jammed trying to leave the state. And we can’t flee every time a hurricane heads our way. We have obligations here, especially in Orlando. We have millions have people in our city on vacation at any given moment and we can’t just abandoned those people. We have older family members who can’t just up and leave. We can’t just shut down our places of employment every time a storm lurks in the Atlantic. Most hurricanes are not this catastrophic. Even those that bash the islands in the Caribbean rarely ever hit us as hard. We had nowhere to go as the storm was bigger than our entire state.

And just one more thing….there  were not people who were going door to door posing as emergency workers who then robbed people. This was a recycled story from Hurricane Harvey in Houston and while I cannot verify the truthfulness in Texas, these things did not happen in Florida. At least not to the knowledge of our state officials as they sat on the news today and banished this story. So please do not believe or spread this fake news. You are just scaring our families who live north and are already scared for us.

For now, we are just going to take our time recovering metally as well as physically. The tension, stress, and worry before the storm really takes a toll on us emotionally.

Anyway, thank you for the kind words of encouragement and the thoughtful messages. We are thanking the Lord that we have survived the strongest and most dangerous hurricane in the history of the Atlantic. Hurricane Irma was scary. very scary. We were grateful our state was not battered as severely as those islands in the Caribbean. We are thankful we still have our homes, friends and family. And we will rebuild what we lost because that is who are. So you are welcome Northerners, we broke Irma for you. #OrlandoStrong