Let’s step out of Manhattan for this one.  Along the western banks of Hudson River just across from Manhattan boasts the best and most expansive views of the New York City skyline.  This little secret is unknown to most tourists but you can stroll along the river, shop and dine while overlooking the entire city- and it is gorgeous. 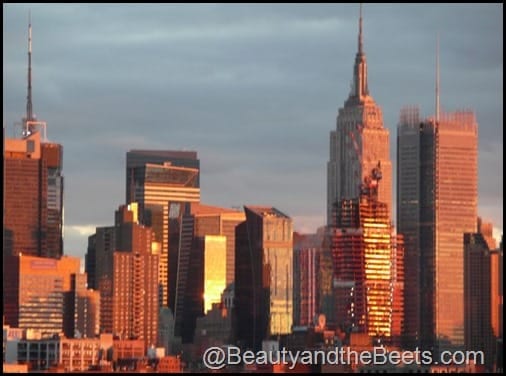 The Hoboken area is very easy to access from Manhattan.  Simply hop on the NY Waterway Ferry at the Mid-Town/39th Street Pier and enjoy the relaxing 6-minute ride over to the other side of the Hudson. 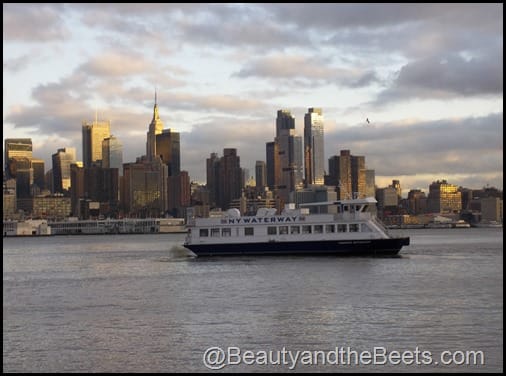 We started at the Port Imperial/Weehawken ferry terminal and headed south.  There is a walking path that stretches about 5 miles from Jacob’s Ferry, north of Port Imperial, into Hoboken.  And the view is spectacular. 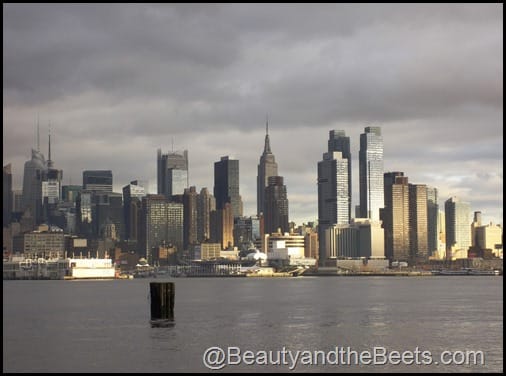 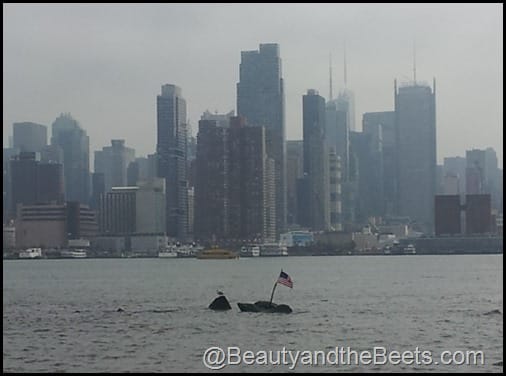 There are several monuments along the way, including the 9-11 Memorial in Weehawken which consists of two trident shaped beams that were salvaged from the fallen World Trade Center twin towers.  It is really powerful to see in person. 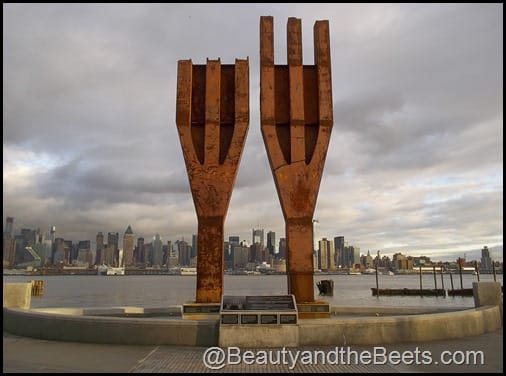 As we continue south, we passed by a few public parks, recreational athletic fields and many very posh residences.  On any given day, the waterfront is filled with runners, dog walkers and bikers. 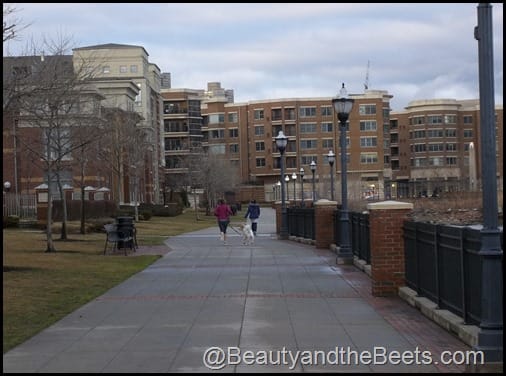 On Pier 13 in Hoboken there is an area of food trucks and a bar where you can catch the latest sport games on TV.

The one thing that never grew old was the view across the river.  Such a colorful city and the angles change with every step.  The Empire State Building hides behind other buildings and then suddenly there it is- right in front of you. 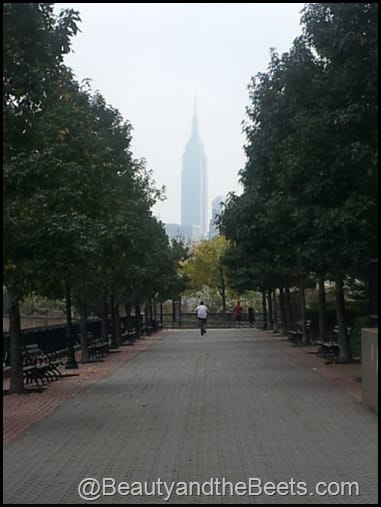 We stopped and had lunch among a row of waterfront restaurants in Hoboken.  There were many options including a place called Littletown NJ and just an FYI- anyone who watches The Real Housewives of New Jersey (guilty and proud of it) will recognize this spot from the show as it is owned by the Manzo boys (just saying.)  Plenty of outdoor seating so you never have to peel your eyes off the skyline. 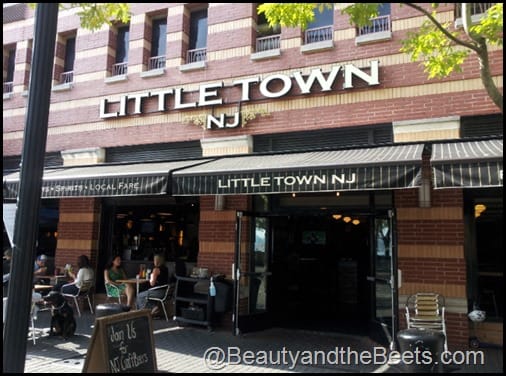 The pathway basically ends at the Lackawanna Hoboken Terminal– a hub for New Jersey transit, the PATH train (Port Authority of NY & NJ) and the Hudson-Bergen light rail.  The Hoboken Terminal is also served by the NY Waterway from Manhattan. 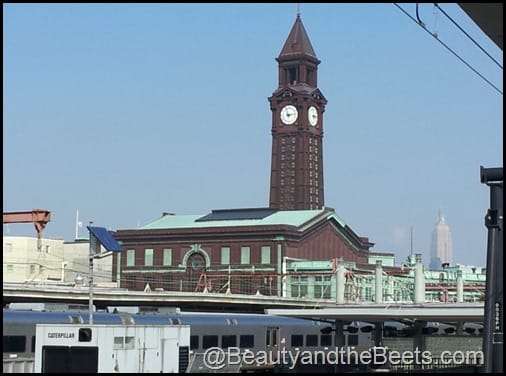 Built in 1907, the terminal itself is listed on the National Register of Historic Places.  It is currently being restored as the station was badly damaged in 2012 during Hurricane Sandy and is just as grand and spectacular as anything across the river in Manhattan. 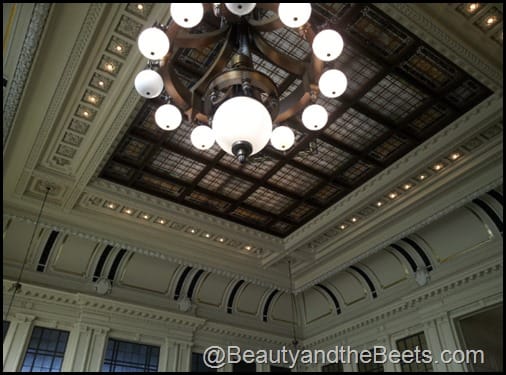 After our 5-mile walk, we hopped on the Hudson-Bergen light rail and rode one more mile down to Exchange Place in Jersey City- the place for amazing up close views of One World Trade Center and the surrounding downtown area.  (This is the area depicted by the blue star on the map at the top of the page) 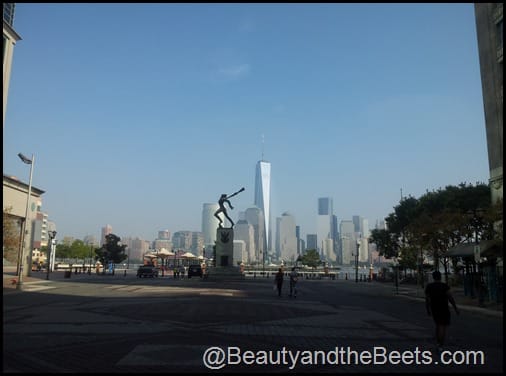 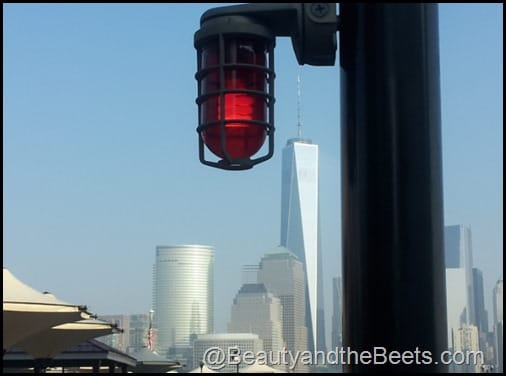 Jersey City also has their own 9-11 Memorial that consists of a mangled beam from the twin towers.  There is also a beautiful monument with the names of those Jersey City residents that lost their lives that fateful day. 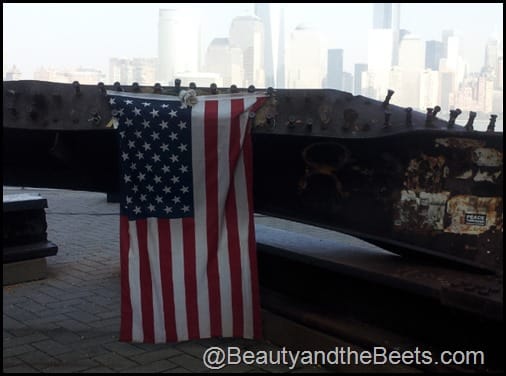 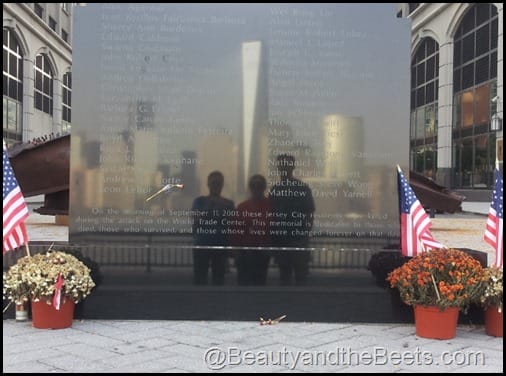 There is a waterfront park where you can just sit and relax.  Watch the cruise ships pass by or watch the rays of light dance off One World Trade Center. 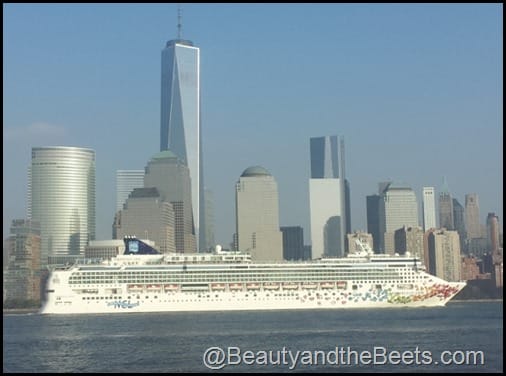 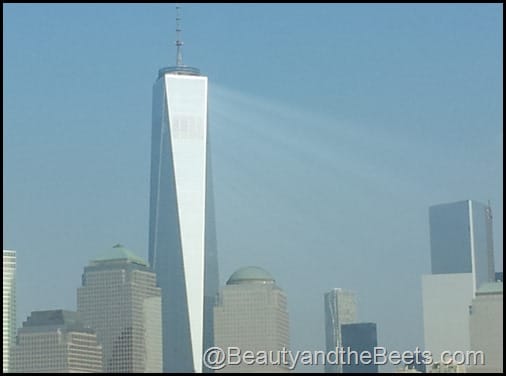 Walk to the southern tip of the Exchange Place area and you can catch a neat glimpse of Ellis Island and in the background, the Statue Of Liberty. 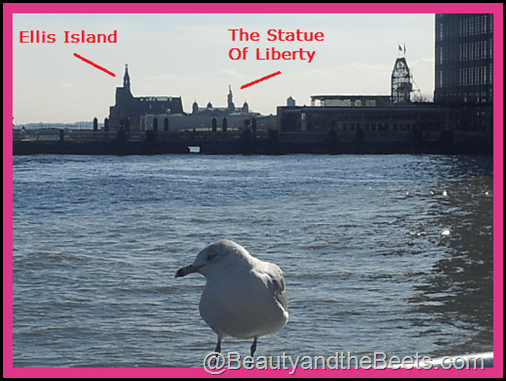 And, of course, not to leave you stranded…you can take a NY Waterway ferry from Exchange Place back into Manhattan or hop on the Hudson-Bergen light rail back to the Port Imperial Ferry terminal. 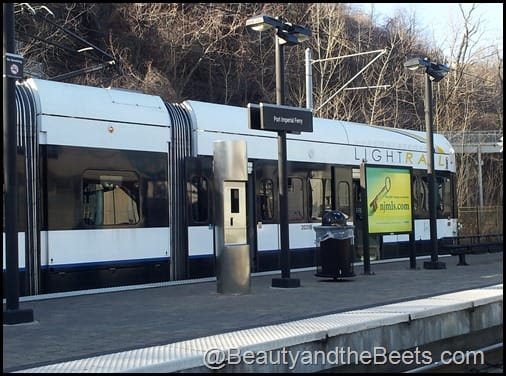 Here is another view- to the left is lower Manhattan and to the right is the skyline of Jersey City at sunset. 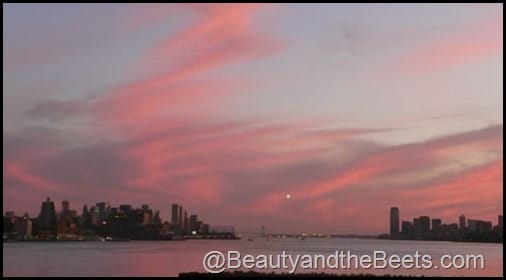 For other ideas for walking in New York City….