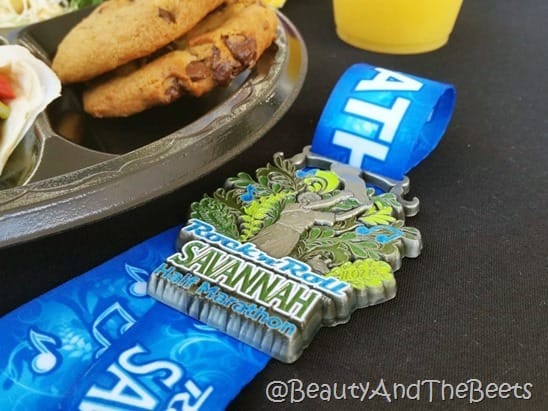 Five years ago, I put on my long johns, leg warmers, wool socks, heavy sweatshirt, heavy winter jacket, gloves, hat, mittens and scarf and shuffled over to the start line for the 2011 Inaugural Rock’n’Roll Savannah Half Marathon. It was 20° F outside.

This was supposed to be my first half marathon. Only I was sick. Really sick. I had the flu and Chad suggested that I maybe sit the race out this time.  And I complied because I really was ill. That day he ran the full marathon and I sat in a comfy warm café and drank hot tea.

It took me FIVE years to return and finally run the race again. Only this time it was 70° out at the start with the temperatures expected to climb into the mid-80’s as the race went on. This time I was wearing a skort and a T-shirt. Everyone was anticipating a very hot race and the Rock’n’Roll Marathon organizers had implemented a heat plan for the 15,000 racers. Extra water stations were set up, air conditioned relief buses were placed out on the course and even the local residents got in on the action, offering sprinklers and water hoses for runners passing by. 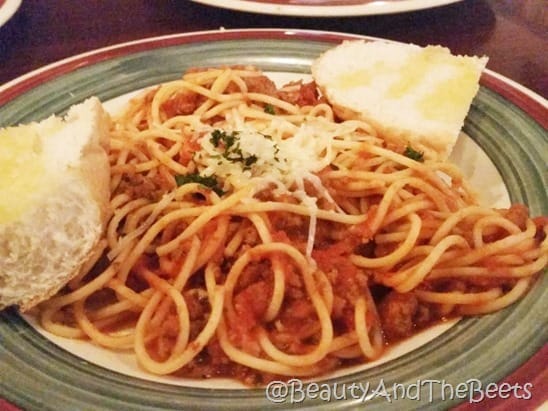 Chad and I loaded up with a pasta dinner the night before from Fat Baby’s Pizza in Hilton Head. We chose a hotel in Hilton Head as it was only a 45-minute drive to the ferry that would take us to the start line. The ferry took runners from the north side of the Savannah River over to the start line. (FYI for future reference- the ferry is free but you must reserve a spot for the parking lot on Hutchinson Island)

I had a plan to run with Meghan from Meghan on the Move – both of us were members of the Rock’n’Roll Marathon series Rock’n’Blog 2015 team and we were both friends from Orlando. We met up with some of our other Rock’n’Blog teammates for a group photo before finding our corral and lining up for the start. 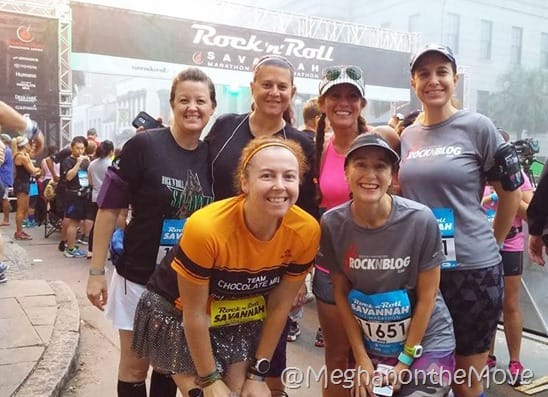 So the race itself was hot but there were plenty of water stops along the route and the stops were well staffed and stocked. As per any of the Rock’n’Roll races, the course is lined every few miles with local bands entertaining us with jazz, drums, rock songs and gospel. And as I said before, the local residents lined the streets with cheers of encouragement, which makes the race easier and more fun to run. Of course, Meghan is a Florida Gator and yelled Gators! at everyone wearing a University of Georgia shirt. I had to run faster just to escape possible residents chasing us.

By mile 10 it was brutally hot. We had begun to hear rumblings of the race being halted by organizers but we continued on, hoping to finish. And we did.  Chad, however, was running the full marathon and his race was stopped after his 19th mile. He did not go home empty handed though, he was still given a finisher jacket and a medal and the wonderful folks at the Rock’n’Roll Marathon series offered him a free entry into another one of their races for the inconvenience of the race being diverted. To me that was very impressive and generous. The weather is not the fault of the race organizers and they were not obligated to offer any kind of compensation. (We learned that later that night the Walt Disney World Wine and Dine Half Marathon had been halted due to heat as well and there was no compensation or refund offered.) 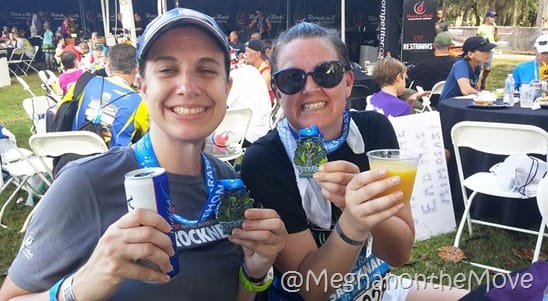 After the race, Meghan and I enjoyed the VIP tent with beer, juices, soda, sandwich wraps (including veggie), salads, chips and cookies. And we chilled to the music of Rascal Flatts– the after-race concert. 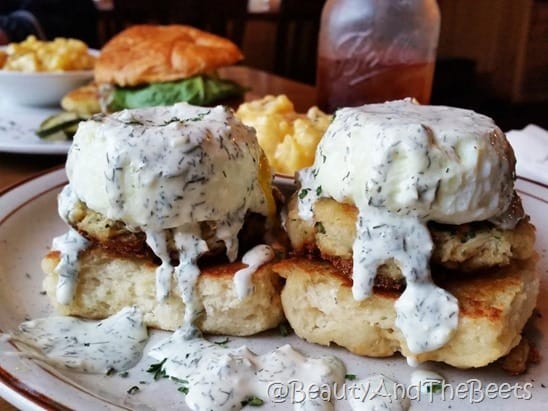 While we didn’t break any course or personal records, fun times were had by all. And the next morning I totally deserved to splurge on sweet tea and poached eggs on crabcakes with a dill sauce from A LowCountry Backyard Restaurant on Hilton Head (<—a shameless shout out!) 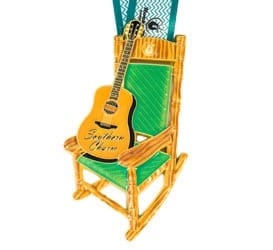 So will Savannah be on my race calendar for next year? YES!! Savannah knows how to throw a great party with their generous Southern hospitality. My goal is to get this Southern Charm Rock’n’Roll medal– a combo medal if you complete three of the four following marathon or half marathon races in 2016: Rock’n’Roll New Orleans, Rock’n’Roll Raleigh, Rock’n’Roll Nashville and/or Rock’n’Roll Savannah.