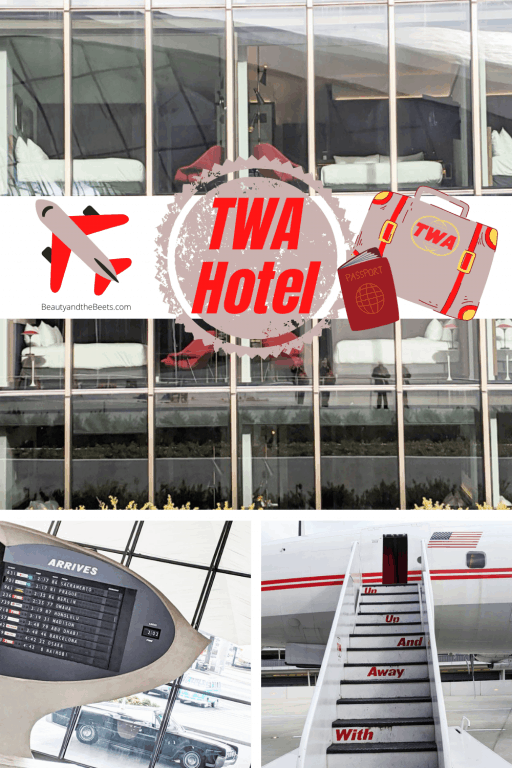 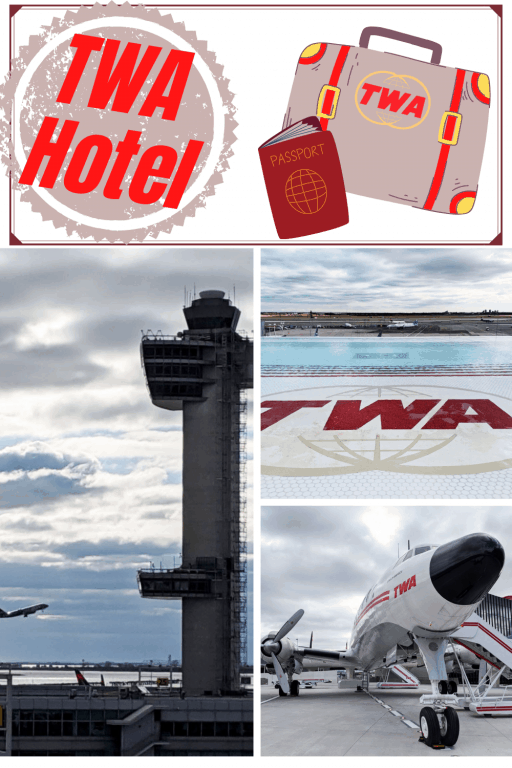 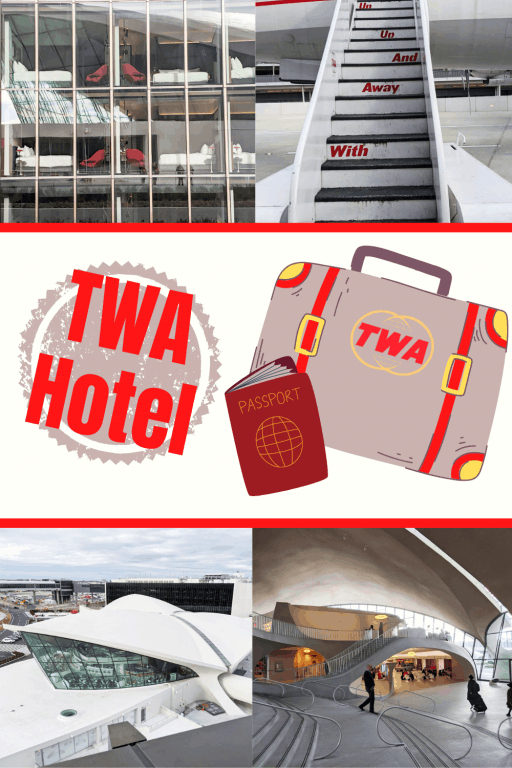 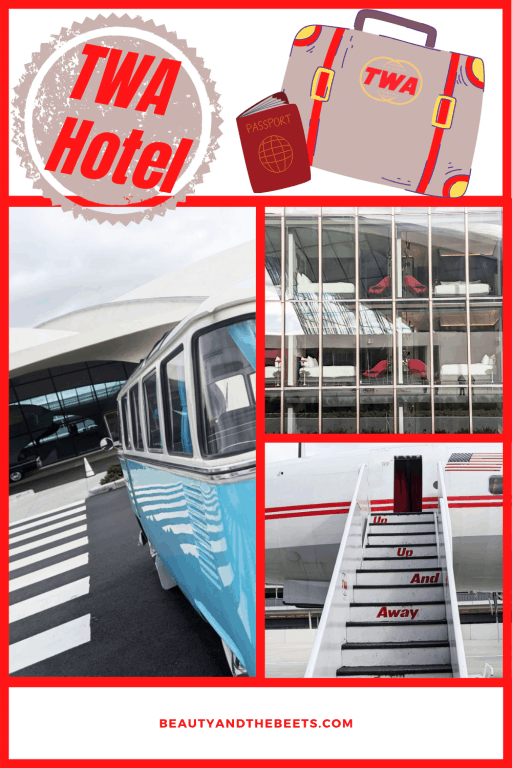 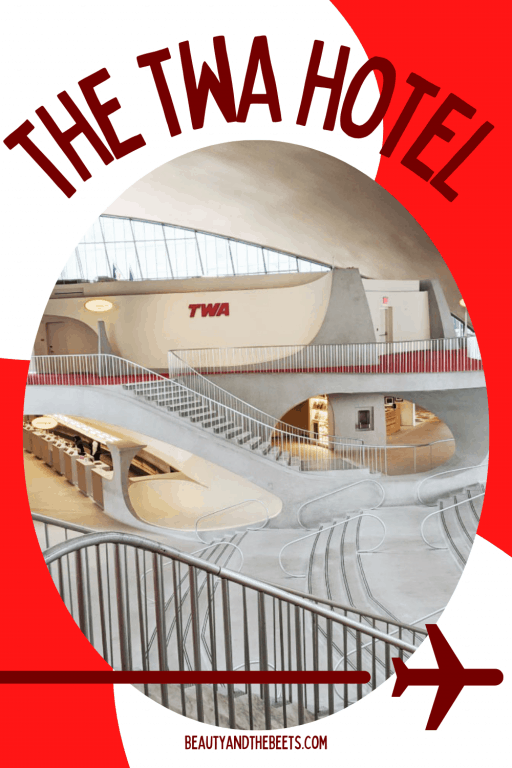 The Idlewild Airport opened in 1948 on the southside of Queens, New York. In the beginning there was only one terminal. Today, the airport is known as John F. Kennedy International Airport (JFK) and has six terminals. JFK is the busiest international air passenger gateway in the United States.

Terminal 5 was opened in 1962 as a hub for TWA Airlines. It was designed by a Finnish-American architect named Eero Saarinen. Saarinen is also the architect responsible for the famous Gateway Arch in St. Louis, and the iconic curved main terminal at Dulles International Airport outside of Washington, DC. TWA operated out of the complex until 2001 when American Airlines took it over. The terminal, once dubbed “Grand Central of the Jet Age”, was closed in 2002.

While a new terminal 5 was built, the old Saarinen TWA building sat empty, save for an occasional movie shoot (Catch Me If You Can, for one). It wasn’t until 2015 that the groundbreaking began for a new project – the TWA Hotel.

The hotel opened in May of 2019 and consists of the original TWA head house along with two newly constructed wings that houses 512 rooms, some overlooking runway 4 Left/22 Right. To this day, it is the only on site hotel at the JFK Airport.

I recently visited the TWA Hotel, had lunch at the Paris Cafe, visited the rooftop infinity pool, and sat in the Connie cocktail lounge.

The hotel can be accessed on the lower level of JetBlue’s Terminal 5. Just look for the elevator in TWA livery behind baggage claim.

You will then find the entrances to one of two Saarinen flight tubes.

From there you will enter the 200,000 square foot lobby, and you will have stepped back to the year 1962. In the lobby you will find some of the original fixtures from TWA’s golden years including the refurbished Solari split flap arrivals and departures board, and The Swiss Vulcain Clock.

The Sunken Lounge, Twister, and the TWA Hotel Shop

Also on the lower level under the split flap board sits the Sunken Lounge, where weary travelers can relax with a Negroni and some light bites.

The old departures hall has been converted into a food hall, complete with a Chicago based Intelligentsia Coffee Bar.

There is a 10,000 square foot gym complete with Peloton bikes and a yoga studio, and the TWA Hotel shop. There you can buy basic toiletries as well as logo gear such as hats, towels, alarm clocks, and Cashmere sweaters.

Make a phone call on a real working rotary phone (and it’s a free call!), grab a Tab cola from the lobby mini bar, and play a wall to wall game of Twister, all in the lobby.

On the second floor of the open space lobby sits the Paris Cafe, in the footprint of the original terminal’s restaurant. The menu is simple, based on in-flight menus from TWA’s heyday. For pictures and details on the menu, visit my post The TWA Hotel Paris Cafe.

The TWA Hotel is not just a place to lay your head or grab a bite. Across the lobby on the second floor is a museum exhibit of original TWA travel posters and 37 TWA Flight Attendant uniforms dated 1945-2001. Such designers as Oleg Cassini, Pierre Balmain, and Valentino designed the glamorous uniforms worn by the TWA Flight Attendants that flew all over the globe.

If drinks in The Sunken Lounge didn’t quench your thirst, climb aboard Connie, a 1958 Lockheed Constellation Starliner, repurposed into a cocktail lounge. There you can sit in her original plaid leather seats, grab a cocktail and enjoy a light snack. Connie was part of the TWA fleet. She would carry 99 passengers and five crew from JFK to Paris in 14 hours and 50 minutes. For more pictures and history on Connie visit my post TWA Connie Cocktail Lounge.

Also check out the outdoor ice rink just under the nose of Connie (yes, an ice rink! It’s tiny but it’s an ice rink at the airport!)

The hotel lobby is flanked by the 512 guest rooms, housed in two six-story towers. Each room has amenities including plush beds, stocked martini bars, and windows seven panes thick for an ultra quiet rest. (sorry no room pictures)

On the top of the Hughes Tower is the TWA rooftop infinity pool and Runway Chalet lounge. The “pool-cuzzi” is heated to 95 degrees and overlooks one of JFK’s busiest runways. From the rooftop deck you can see 12 miles into Manhattan, and across the runways to Jamaica Bay. Did you know JFK also has a runway that is almost three miles long and used to serve as a backup landing site for NASA’s Space Shuttle? Ya, you can see that from the rooftop too.

For more pictures and history on the rooftop pool visit my post the TWA Hotel Pool.

Day Passes at the TWA Hotel

You don’t have to be a guest at the hotel to enjoy the amenities. A day pass can can be purchased in 4-6 hour block increments and you will have access to the gym, rooftop pool, and all the lounges.

Getting to the TWA Hotel

The TWA Hotel is easily accessible to and from Manhattan via the JFK Airtrain, the NYC Subway System, or the Long Island Railroad.

(note: Check with the hotel as day passes have been temporarily suspended due to the pandemic. Other amenities are either closed or open with limited service)

You did an absolutely fantastic job of describing everything. Great write-up. Makes me want to go back again. Love all the pictures!!!!!!!