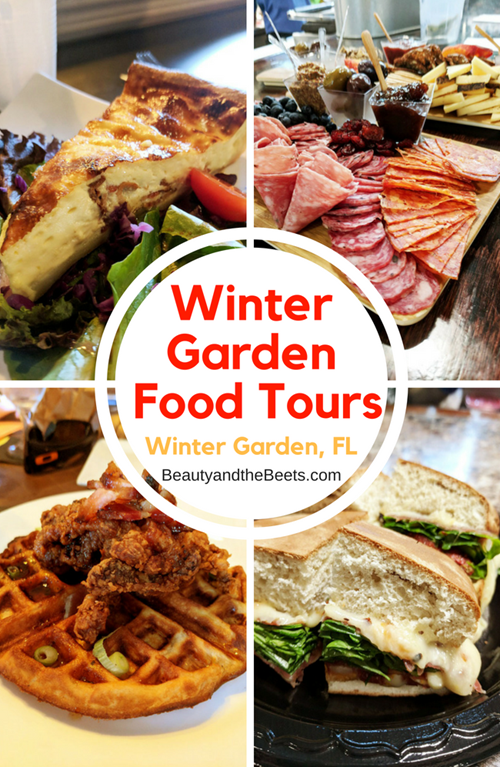 I AM A SELF PROCLAIMED FOOD TOUR JUNKIE.

Food defines the culture  of a town.  Most cities, whether large or small, offer some type of a food tour highlighting its local eateries and culture while also teaching aa little history. While it’s something I love to do when I’m traveling, I also love exploring food tours in the backyard of my own town. Orlando is the home to several food tours highlighting its various neighborhoods. We are a foodie town afterall. 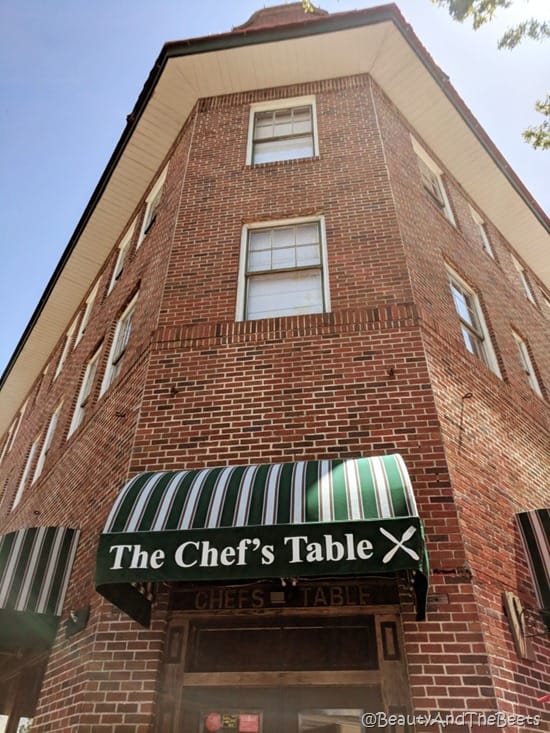 I recently had the opportunity to join the Sunday Brunch and Brewery Tour with Winter Garden Food Tours. Winter Garden is a small town located about 15 miles west of Orlando. The main street through the historic downtown is called Plant Street, which is the main hub of restaurants, bars, and shopping. Winter Garden is also home to one of the area’s most historic and popular professional theatres – The Garden Theatre. On this particular Sunday, I met my tour guide and fellow tour-ees at the Centennial Fountain in the center of town. After a few brief introductions, John, our guide, walked us a few feet over to The Chef’s Table at the historic Edgewater Hotel.  The hotel opened in January  1927 and has been a popular hotspot for locals and tourists alike. There are three restaurants at the hotel – Thai Blossom, The Tasting Room, and the Chef’s Table. The Tasting Room is a great spot for tapas and cocktails, while the Chef’s Table is a fine dining three-course establishment, a place where you make reservations and eat what you are served. The Chef’s Table is a popular spot for romantic outings and celebrations. 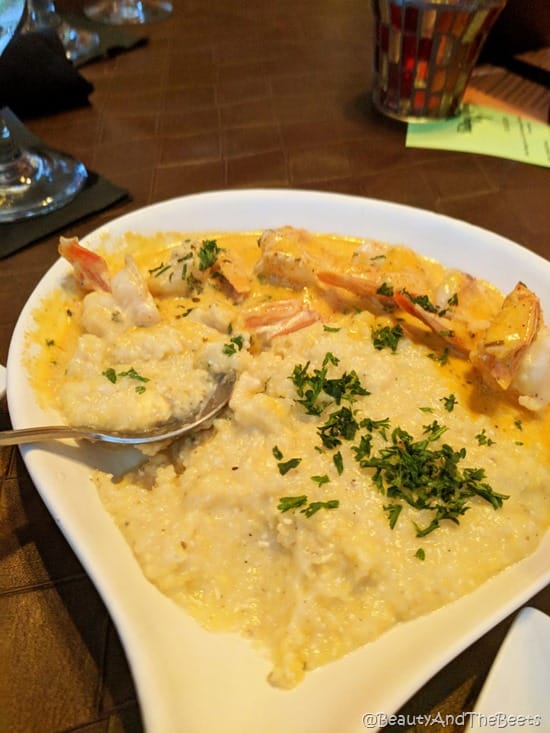 We went into the Tasting Room to enjoy some of their brunch offerings. We began with Shrimp and Grits and they were perhaps just as authentic and delicious as any of the same dish I have had in Charleston or New Orleans. 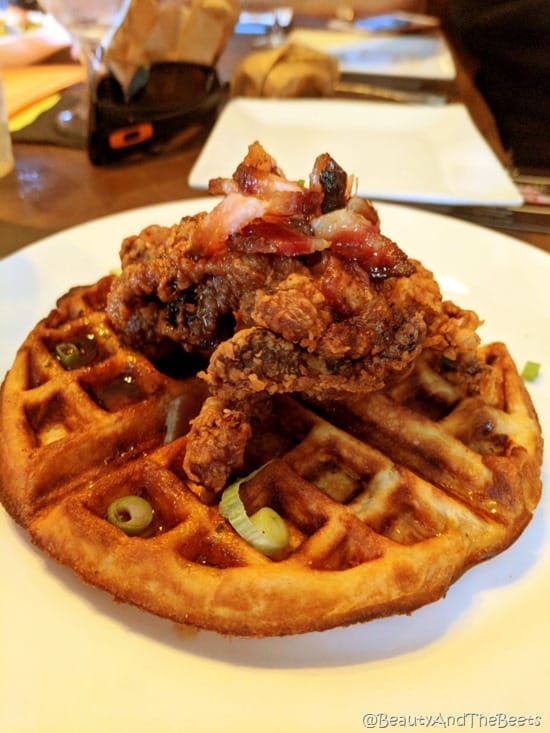 We also split an order of Fried Chicken and Waffles. The dish was topped with bacon making it a well rounded dish for brunch. 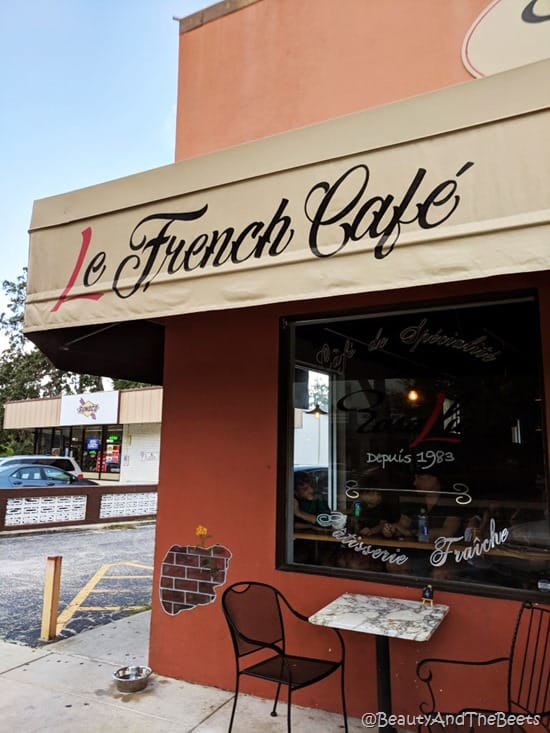 The next stop was just a few doors down at the Rosallie Le French Cafe. Rosallie opened last summer in July after the departure of Sweet Traditions French Bakery. This is the second location for owner Jonathan Pluvinet – the first location is just south of The Strip in Las Vegas. At Rosallie, we enjoyed a slice of bacon quiche over a lightly dressed green salad. 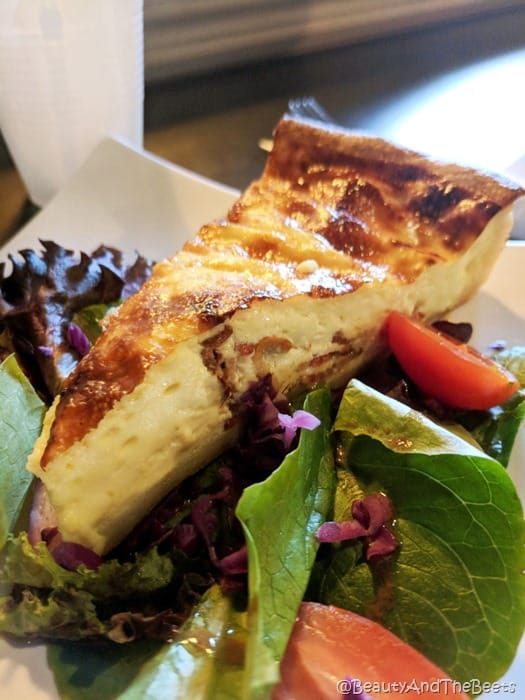 The quiche was cooked absolutely perfectly, soft in the middle with a beautiful top crust. There we also picked up some homemade black cherry jam (all take home treats are on your dime and there is not a lot of time for lingering and shopping- best to revisit the stores after the tour). 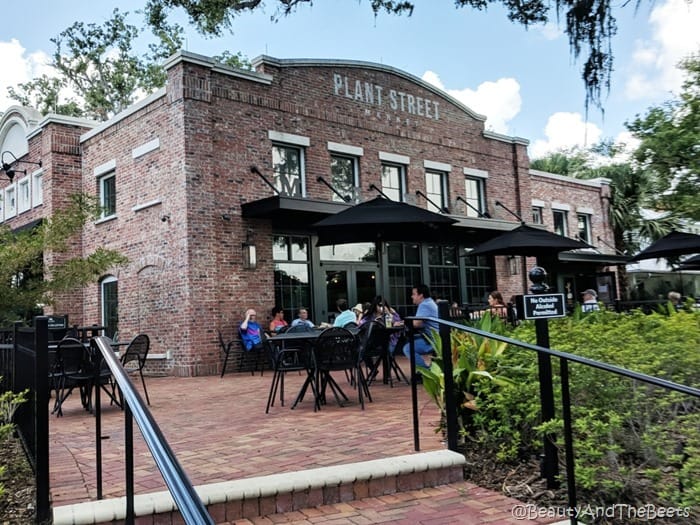 Next it was a short walk (about two blocks) to the 12,000 sq. foot indoor mecca known as Plant Street Market. Opened in 2015, Plant Street Market, was a major player in establishing Winter Garden as a culinary destination. There are about 20 vendors ranging from a tea stand, a butcher shop, a sushi spot, and a brewery. 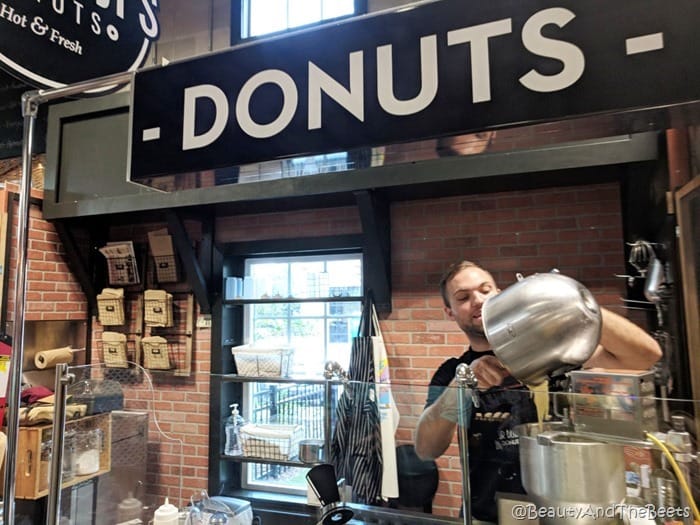 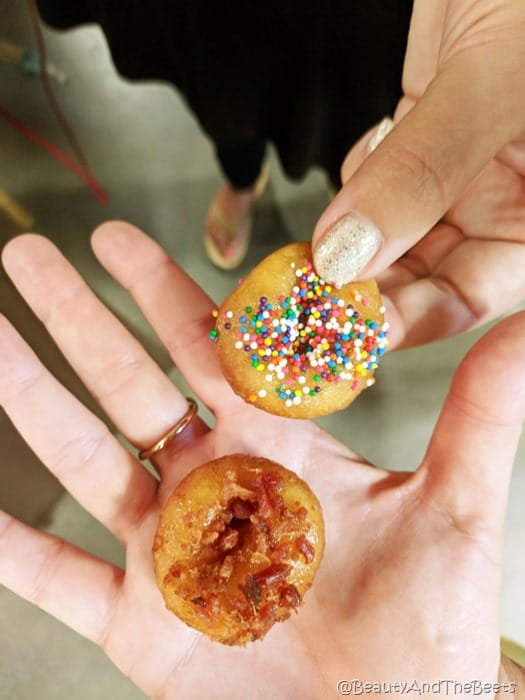 We started by visiting Sir Kenji’s Donut stand where the donut-eer churns out mini bite sized treats which are then topped with various delicacies like bacon and bourbon, or icing and sprinkles. 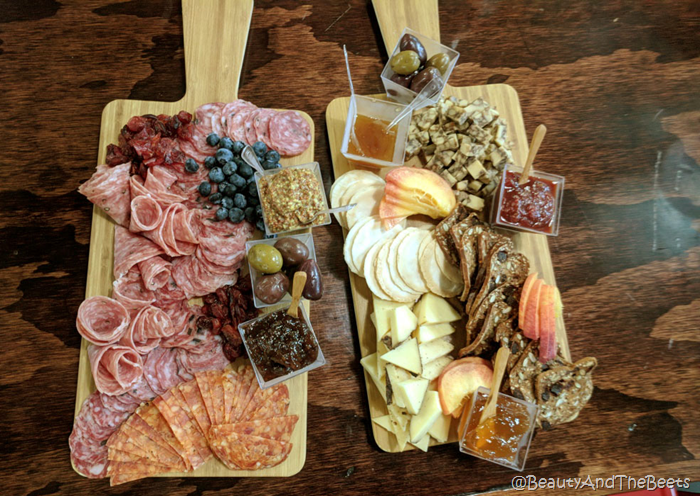 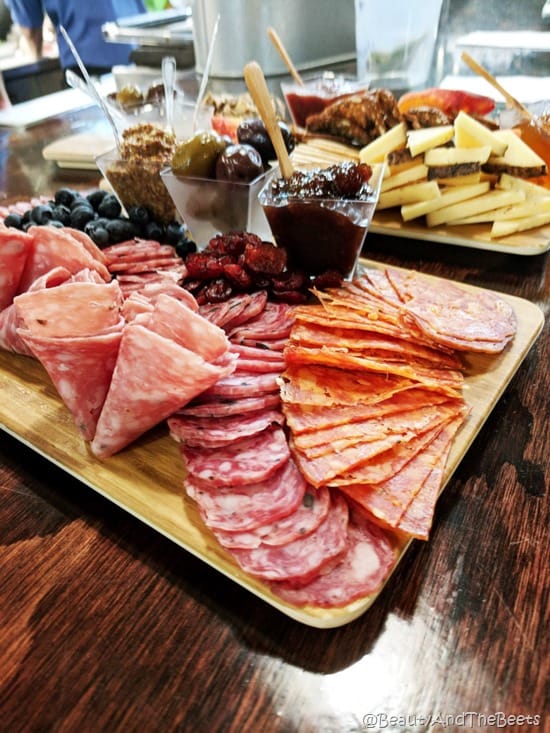 Next we stopped at The Local Butcher where we noshed on huuuuuge charcuterie boards with meats like salami and prosciutto, and cheeses like espresso cheddar and brie. Paired with breads, strawberry jam, and jalapeno peach jam, this was the highlight of my tour. I love the variety of a charcuterie board! 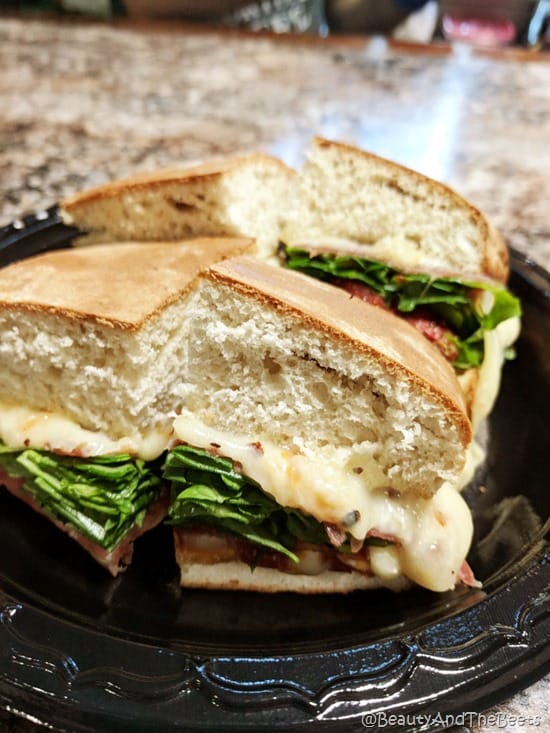 Just across the hallway is Morthan Cheese where we watched owner  Emilio Queiroga Gimenez whip us up a prosciutto and cheese melted sandwich. First the meat and veggies are piled onto fresh bread. The show begins when a 13-pound wheel of raclette cheese is melted under heating lamps, then poured over the sandwich. It’s the type of intrigue that attracts a crowd.

The last stop on the tour was at the anchor of the market – the Crooked Can Brewery. From here there are two options, you can enjoy a tour of the brewery, or, for non drinkers, have your final tasting at the Antiquiteas – a specialty shop with crumbcakes, crumpets, and a variety of loose leaf teas. 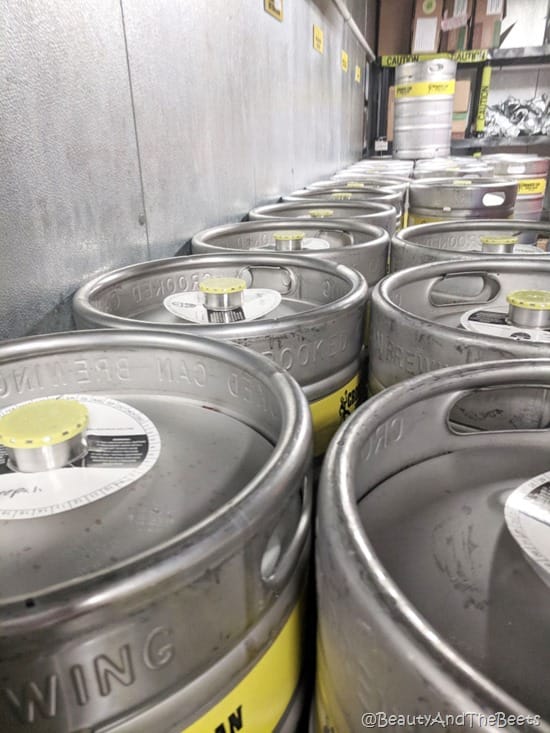 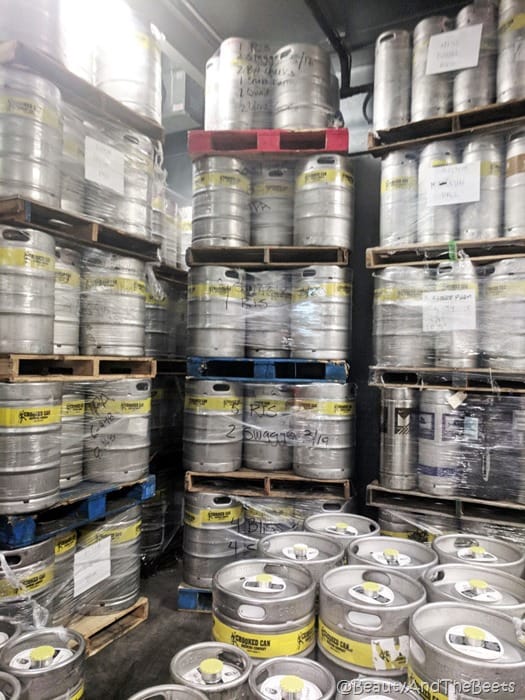 Four of us on the tour chose to take the brew tour, while the other four went to the tea shop. The brewery tour was interesting as we basically learned about the Crooked Can brewing process and saw the giant vats that hold all that yeasty goodness. We also saw the distribution room that was floor to ceiling packed with kegs, cans, and bottles waiting to be shipped out to locations across the state of Florida for consumption.

All in all, the tour was fun and I was certainly stuffed. The one thing that was disappointing was the lack of historical facts about the town of Winter Garden. Everything in this article is information I have learned own from years of living in the Winter Garden area and frequenting its downtown establishments. However, I did leave overstuffed with sandwiches, waffles, donuts, and cheese.

Winter Garden Food tours offers 4 types of tours from two brunch tours to a dinner tour to an all desserts tour. If you are in the Winter Garden area, I highly recommend this very affordable and filling food tour. However, our tour was very pork friendly at almost every stop and it is stated on the website that they are unable to accommodate food substitutions for food allergies or diet preferences. Just something to keep in mind.

*I was invited on a complimentary food tour with the winter Garden Food Tour. All opinions are my own.*