The Jacksonville Bank Marathon is a small race that is run just south of the downtown area in Jacksonville, Florida.  It is small but popular among locals.  This was going to be my first half marathon ever and Chad was going to be running his third full marathon.  I had tried to run the Savannah half marathon last year but I wasn’t able to even start because I had gotten the flu that same weekend, but Chad  had successfully completed his second full marathon there. 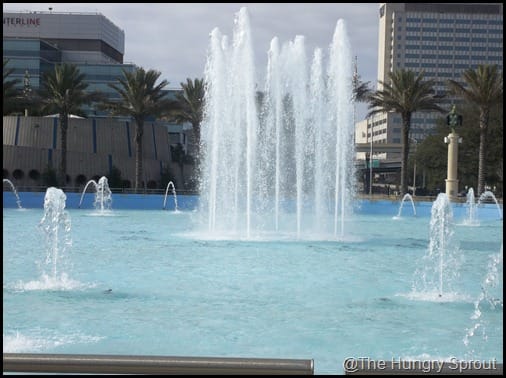 After spending the two days before the race  relaxing, eating pasta and exploring Jacksonville, Sunday morning finally rolled around.  And it was early.  And I was so nervous.   Since Chad was running the full I was going to run the half entirely on my own.  As we drove to the course I told Chad I didn’t want to do it.  I had changed my mind.  I wanted to go back to the hotel and go to sleep.  Please don’t make me do this.

I realized I  wasn’t afraid that I was going to be doing it alone, I was scared of failure.  I was scared of getting injured halfway through and not being able to finish.  I was afraid of getting so bored that I would just give up.  I was terrified that I was going to be so slow that the officials were going to roll up the mats and kick me off the course.  As I said “good luck” and “goodbye” to Chad, he went towards the front of the pack and I squirreled my way to the very back, since I fully intended on walking the entire 13.1 miles.

There were actually three races all starting at the same time.  The 5K (which is what I would normally run), the half marathon and the full 26.2 mile marathon.  Each person had a colored bib that reflected which race they were in.  As I stood in the very back of the pack  I looked around and tried to figure out who was a runner and who would be walking like me.

Suddenly it was time- we were off.  Suddenly, my adrenaline skyrocketed.  Suddenly, I was ready to do this.  I started off with a slow steady jog just as I normally would for a 5K, but  I soon started to realize that perhaps starting off fast and fierce wasn’t the best idea if I planned on completing a course that is almost 5 times longer than I was used to, so I stopped to walk.  Other people were passing me but it was OK- I  didn’t care if I finished dead last- as long as I finished. 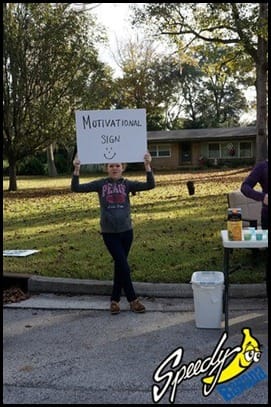 The first 3 miles of the course was the route for the 5K race.  I had my timer watch on and figured a 15 minute per mile pace was a decent steady speed for myself (that was also the minimum required pace to remain in the race.)  I looked at my watch and I was nearing the 22 minute mark and I hadn’t even passed mile 1 yet.  Panic set in.  I wasn’t even going to finish the 5K in the required time- I was going to get kicked off the course for being too slow!   Then, at about the 25 minute mark I passed mile 2.  Whew- somehow I just missed the first mile marker and now I only had 11 more miles to go!!  UGH-  11 MORE MILES TO GO!!

As we approached 3.1 miles, those who were only running the 5K were ending their race.  I was so tempted to just stop right there with the others…so tempted to just go grab a bagel and a water and just wait for Chad. 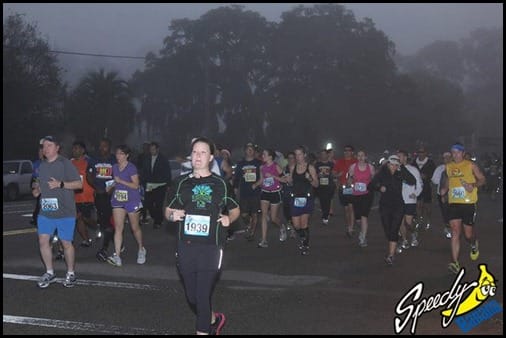 Nope, nope, nope.  I was going to do this.  Those who were in the half were the only ones still around me and I realized there were plenty of walkers in front of me, behind me and beside me.  Something came over me and I felt like running again.  I had a peppy song playing on my I-Pod and I thought I would just run to the beat.  I didn’t run long but I still ran a little.  Truthfully, that kind of set the tone for the rest of my race.  I could do this.  I ran during the fast upbeat songs and walked when the music slowed down. 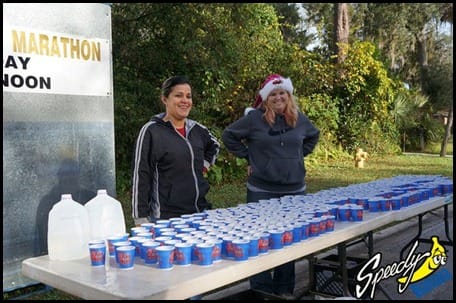 I am pretty sure I was operating on pure adrenaline at that point.  I was counting down the water stops every time I passed one (there were six total on the half marathon course.)  I kept setting little milestones for myself-  at 5 miles I would be about 1/3 of the way done,  at mile 7.5 I would be halfway done with the race.  Obviously I was not doing my math correctly. 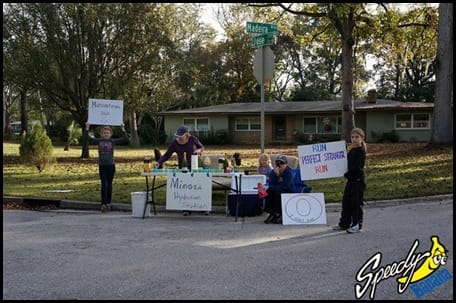 I arrived at mile 8 and thought “Wow!  I am a little more than halfway done!!”  Then it occurred to me that 6.5 miles was the halfway point not 7.5- so I was well beyond that- my brain played a little trick on me- and it worked.  I only had 1/3 of the race left. There was no turning back now.  At mile 8 we were slowly looping back towards the finish line and rejoining the full marathon- our mile 8 was their mile 21.  Many of the elite marathoners were passing me.  They made me run faster- well at least made me want me to run faster. 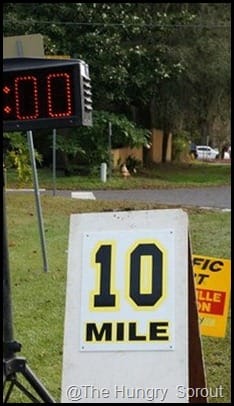 By about mile 10 I was on fire.  I was running.  I was hamming it up for the race photographers that were on the course.  I was passing many of the people who had passed me way earlier in the race.  I was smiling.  My eyes were welling up with happy tears.  I knew I was going to do this.  However, I did walk a lot too still- I didn’t want to blow all of my steam and not make it to the finish.  At this point, I was well ahead of the 15 minute per mile pace I had expected I would do.  At a 15 minute per mile pace I would have crossed the finish line at 3:16:00 (three hours and 16 minutes), however, according to my calculations I was on pace to make it in under 3 hours.  Chad would never believe it.  I couldn’t believe it- but I still had to be careful and pace myself.  I decided that finishing under three hours was not as important as just finishing.  Pace yourself.

Mile 11:  I was running again.  I don’t know if I was in so much pain that I just wanted the stupid race to be over or if I was just flying high.  I could have just been delusional at that point.  Whatever.  I just kept going. 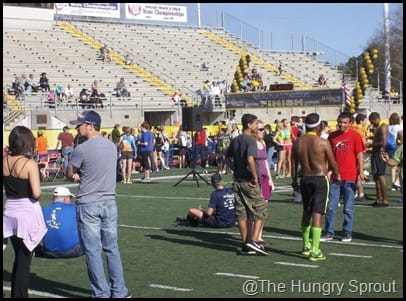 The very last part of the race was entering into a stadium and circling about halfway around the track.  That was torture.  You can see the finish line.  You just want to cut across the grassy football field and cheat.  There is someone announcing names as people entered the stadium.  There are hundreds of people lining the course screaming and cheering and encouraging you.  You can see just beyond the finish line the medals, the cold water, the bagels, the bananas and a grassy place to collapse. 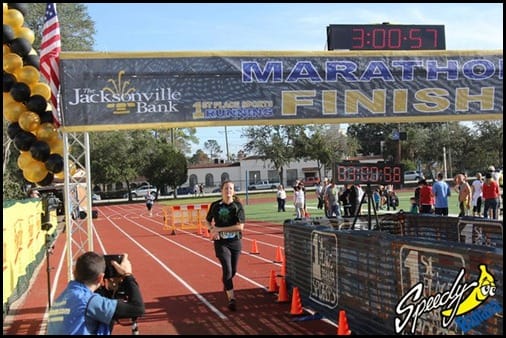 I heard my name announced over the loud speaker.  I was about 50 yards from the finish.  I looked at my watch.  I was going to make it in under 3 hours.  I had to look like I was running for the finish line photographers.  I must look awful.  I just finished a 13.1 mile race!  Don’t take my picture.  I probably look all sweaty and gross…….. 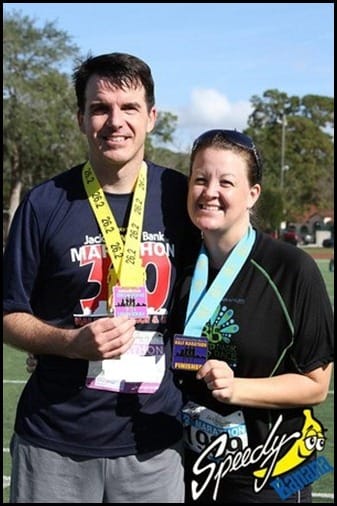 I did it….I crossed the line.  My official time was 2:58:13 (two hours, 58 minutes and 13 seconds.)  Oddly enough, I didn’t shed a tear and I didn’t immediately find myself getting to a grassy spot to sit.  Instead I went over to where the other runners were entering the stadium and I cheered.  I cheered for all those people that were going to be hurting as physically bad as I was but who were going to be as emotionally charged as I was.  Just after the 4 hour mark, Chad finished his race.

I don’t think it really hit me until later that night when I was having dinner with Chad.  I did it.  I DID IT!!  I can cross that off my bucket list.  I WILL NEVER RUN A HALF MARATHON AGAIN.  NEVER.  NEVER EVER NEVER.

Two days later I found myself sitting next to Chad as we starting plotting where our next race will be and yes…I will be completing my second half marathon soon.

Thank you to the Speedy Banana photographers for letting us share pictures on the blog!